Walking in the Lake District: Windermere 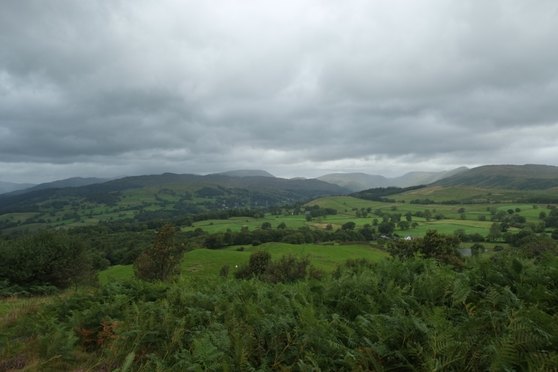 There’s a reason the Lake District has inspired poets and wanderers for so many years. 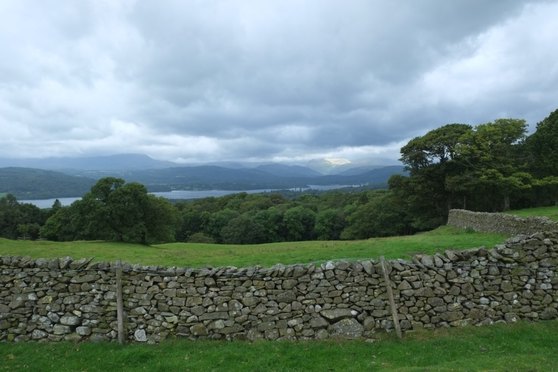 We fell in love on our first visit last October, and I have been watching for an opportunity to return. When we mapped our route home from Switzerland and decided that I would be at the wheel from London to Aberdeen, I spotted my window. I would break the journey at Windermere. 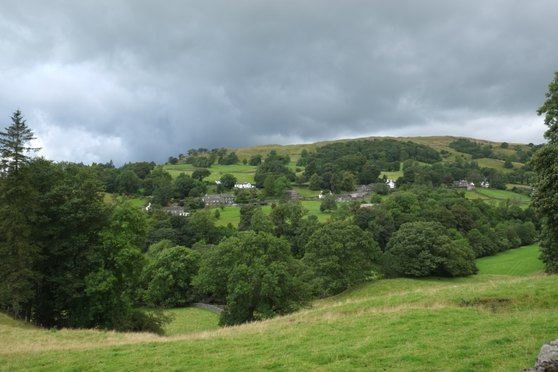 The kids and I stayed two nights at the YHA hostel so that we could get in a proper walk in the area. We asked for recommendations from our lovely hosts, who gave us maps of walks that begin at the hostel. 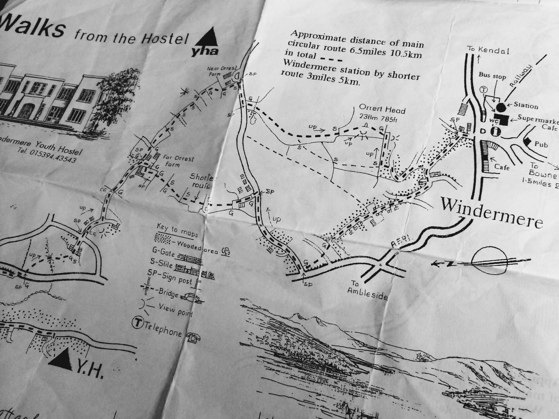 We decided on a walk to the village of Windermere via a viewpoint of the Lake at Orrest Head. Then we would go down and have lunch by the lake and circle back up to the hostel.

The hostel sits in the hills above Windermere , with this gorgeous view of the lake. We set off towards Troutbeck and followed the public bridleways through fields and over stiles. 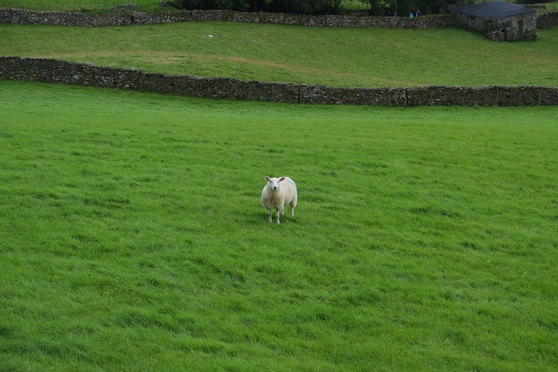 It had been raining for days in England, and we walked in clouds with a few light showers, but managed to avoid being out in any heavy rain. However, the trails were super muddy.

I might have irritated a few cows when I managed to fall in a particularly muddy field, and we ended up being chased out by some mama cows. 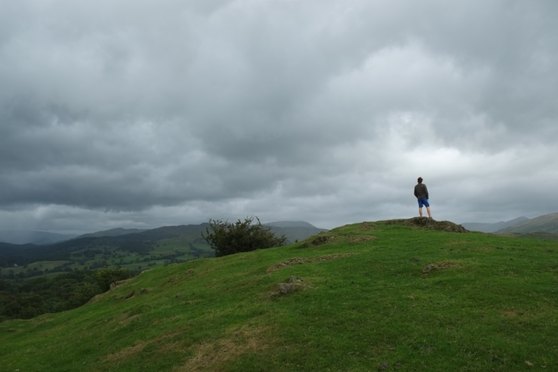 We found our way back to the trail a different way and then continued on to the viewpoint at Orrest Head.

The wind was blowing hard and the clouds were becoming heavier, but it was a beautiful spot. I would love to go back on a sunny day. We did not stay long, but descended into the village of Windermere. 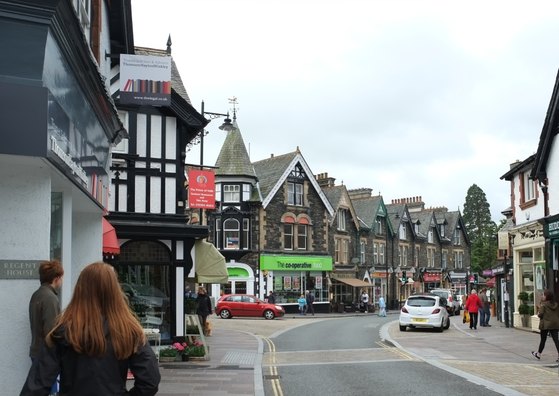 It started to rain a little bit more, so we waited it out a bit at the library in Windermere, where there was a fascinating exhibit called From Auschwitz to Ambleside, telling the stories of 300 Jewish orphans who were brought to the Lake District to recover after WWII. I lost myself for a while in the tales of their survival and how they picked up the pieces of their lives and started over in England.

I can see how being on the shores of Lake Windermere could be both a respite and a new beginning. 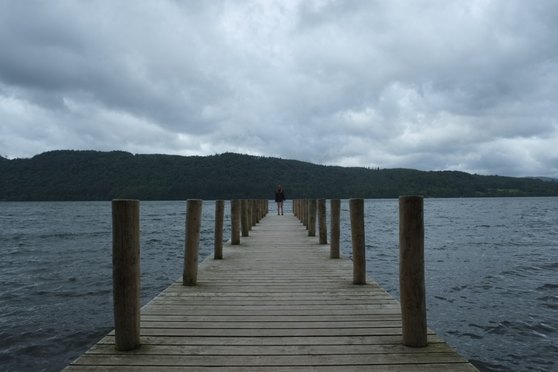 We went there next, carrying boxed sandwiches, crisps and fruit from a market. We ate our lunch by the lake and then walked along the shoreline back towards the hostel. 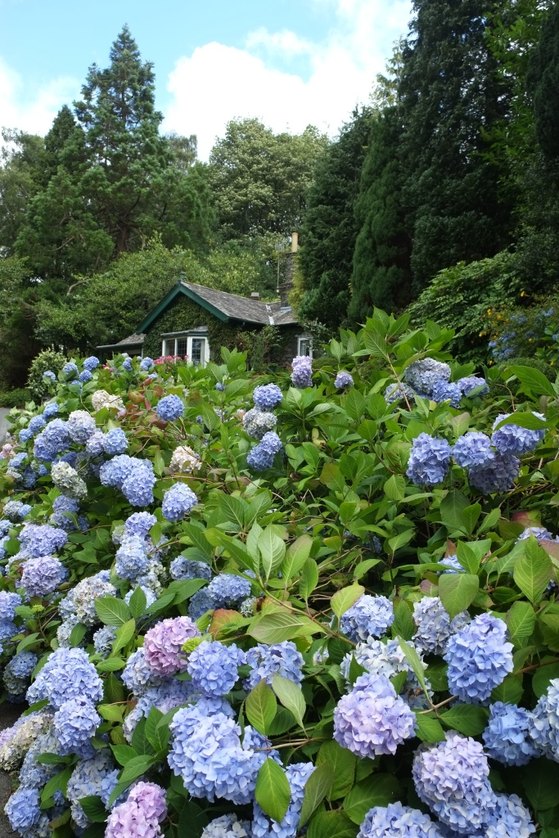 We went back to the hostel a different way, partly along the road. The clouds cleared up a bit and we even saw some blue sky. But the brightest blues were these hydrangeas that were in bloom all over the area. 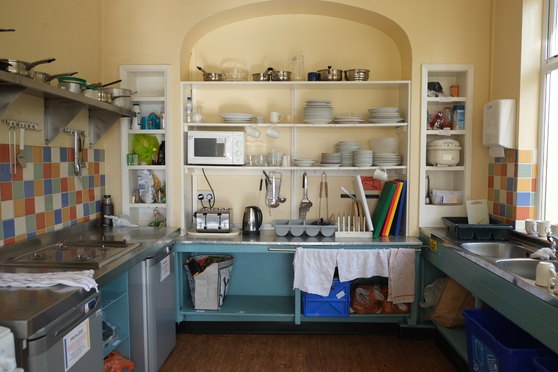 It was late in the afternoon when we got back to the hostel, and it started to rain really hard. We sat in the kitchen over bowls of soup and cups of tea, feeling quite smug about getting out for such a gorgeous walk before the rain settled in.

Our stay at the YHA in Windermere was part of our blogging partnership with them to encourage more families to give hostels a try! We also stayed with them last October at Buttermere (in the Lake District) and previously this summer in London. More photos of our quick stop in Windermere can be found in the Google+ album.