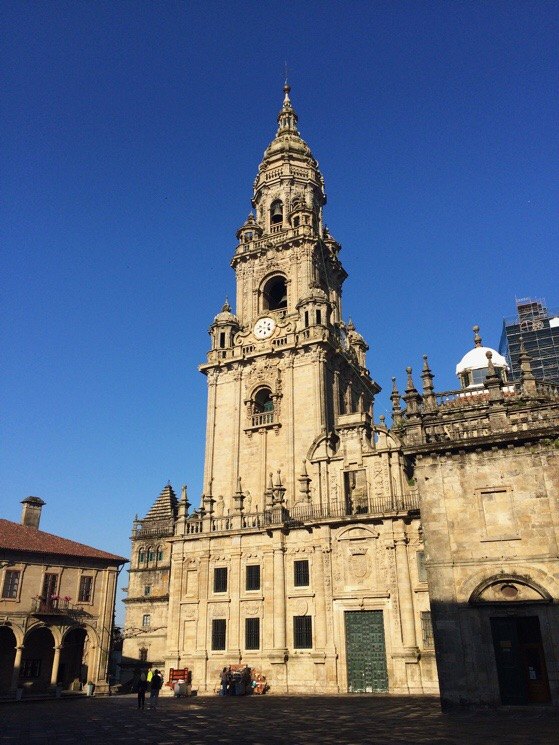 call pilgrims to the Cathedral

the doors are open and the people pour in.

taking it all in.

against columns and along walls.

The closest seats are reserved for those who have walked to be here.

We have just arrived in Santiago.

We will begin walking tomorrow.

Backwards, we have come to the mass that you are meant to attend upon finishing.

It is not the first time I have done something the wrong way,

and it certainly will not be the last.

We find a place to stand, awkward between a post and the sides of long pews.

We each have a place to lean.

I watch faces and guess which ones have walked the longest

or fought the hardest battles

Some eyes are shining and others are very, very tired.

Some have come in with the dust on their feet.

Others arrived yesterday, and have cleaned up before coming to church.

speaks out strongly from the nave

words we do not understand.

She sings a line.

Though it is in Spanish, I know it is worship.

She smiles and motions

and then the whole cathedral echoes the line.

The sound fills the cavernous heights.

She sings another line, pauses and then again, the people echo.

Oh, we are repeating, we slowly understand.

We stumble to join in,

The lines stretch and grow and fill

not just the church,

but also our hearts.

Men in robes who have come from all over the world take their turns offering prayers.

I hear a prayer in American English, midwestern I think.

Then these same men take cords together and release the famous thurible,

the local language in this part of Spain.

Together, the red-robed tiraboleiros send the censor swinging

And they are singing

Smoke swirls through the air, released from the censor by the motion.

The smells and the sounds

find their way to every far corner of these hallowed halls.

Behind the nave and the swinging thurible,

the remains of Saint James are preserved in a shrine.

The tomb of the saint has called pilgrims to Santiago since the Early Middle Ages.

Each one of them has carried a burden, a story or an offering on the long walk. 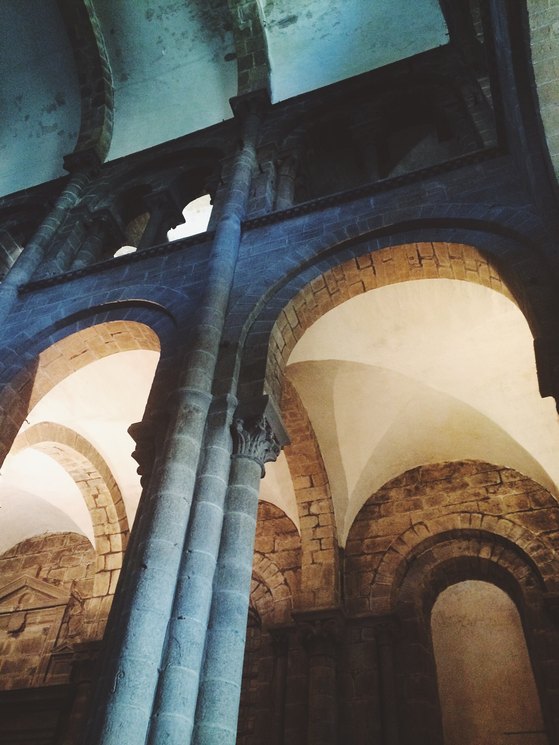 we enter the church again.

with the dust of the Camino still clinging to our feet and faces.

The day’s Pilgrims’ Mass long over,

the afternoon sun low in the sky,

we walk the quiet cathedral

and join the small queue

to pass by the remains of Saint James.

to embrace and kiss

a statue of Saint James.

was martyred for following Jesus 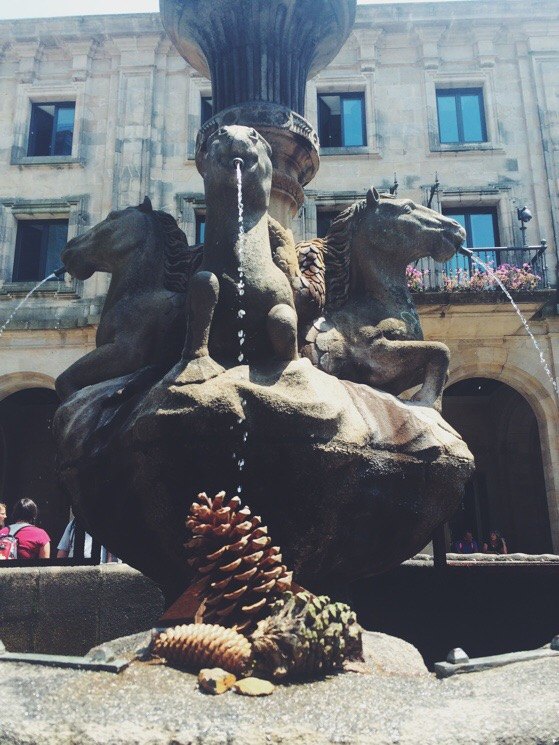 We are four loud American girls, but we are silent as we leave.

We lay down the last of our own relics on the fountain outside the cathedral.

I walk away with the memory of Saint James and his beloved Jesus and these words.

all you who are weary and burdened,

and I will give you rest.

Take my yoke upon you

and learn from me,

for I am gentle

and humble of heart,

and you will find rest for your souls.

Rest for your souls.

A word about the Pilgrims’ Mass: The mass in Santiago de Compostela happens every day at noon. We were fairly certain that we would not reach Santiago by noon on our final day of walking so we decided to attend when we first arrived in Santiago, before taking the train to begin our walk in Sarria. We discovered later that we were fortuitous in attending a mass where the Botofumeiro was present, as it is not used for all services. The censor is the largest in the world, crafted by a goldsmith over one hundred years ago. The services for which it is used change throughout the year, so it is worth researching in order to attend a mass where you will be certain to see it.  The mass fills up quickly, so arrive early if you would like a seat.