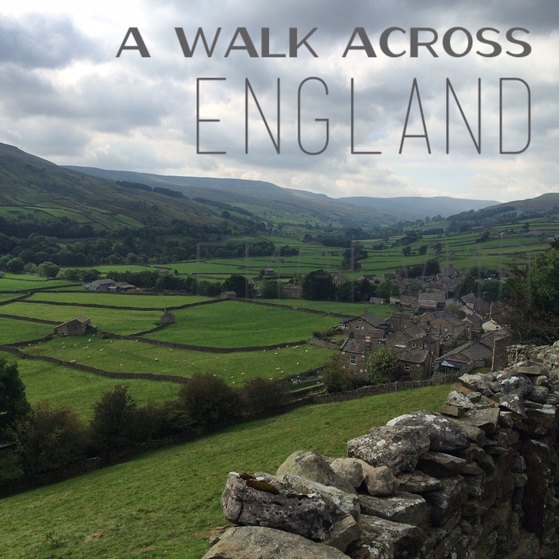 Rising to the Occasion

A year ago I had never before heard the name of Alfred Wainwright, but I had recently met one of many great hillwalkers who have walked in his footsteps. Hillwalker was a term with which I was just beginning to become familiar, having previously only used the American term, hiker to describe someone who spent their spare time wandering hills and forests. This hillwalker told me about the National Trails that exist throughout the United Kingdom, and are one of the greatest treasures of the British Isles, making walking holidays accessible to folks from all walks of life. With a shower and a bed available in villages located along the walks, anyone who fancies a bit of adventure by day can head off into the wilderness and still enjoy modern comforts at night. In Scotland, the right to roam laws that allow walkers on any private lands as long as they are respectful of farms and animals have made hillwalking immensely popular.

You may have noticed that our family took to hillwalking immediately upon moving here. We have always enjoyed a good bit of hiking, but the circumstances of finding ourselves in a new country without many weekend commitments and with loads of trails within an easy drive gave us ample opportunity to explore Scotland on foot. Also, hillwalking tends to be easy on the budget. Besides keeping four growing children in walking shoes, we can generally have a full day’s entertainment for the price of a bit of petrol and a picnic lunch.

After many weekend walks in Scotland, I visited the Lake District for the first time in my life, and like many before me, I fell madly in love. Three days of rainy walking the fells and I was hooked. The grassy trails and autumn colors left me wanting more, despite the bad weather. Even the smallest break in the clouds convinced me that the hills above Buttermere were some of the loveliest in the world. I vowed that I would be back for more weekend wanderings in the Lakes. I picked up my first Alfred Wainwright book in a small bookshop in Cockermouth (yes, that is the actual name of a town). It was called A Coast to Coast Walk. I was immediately intrigued, not only because doing this walk would gain me almost a full week in the Lake District, but because it would be a walk across an entire country, something I had never dreamed possible for someone as athletically challenged as myself.

Perhaps it is that I hail from a rather large nation that it seemed at first glance that two hundred miles to cross a whole country was not such a daunting figure. However, the amount of miles between the Irish Sea and the North Sea on the Coast to Coast walk grew less feasible each time I spoke it aloud to someone else.

Have you lost your mind?

Still, I became determined to do it, in spite of how very long it seemed. In spite of my aging legs and creaky knees. In spite of not knowing exactly when and how it would happen.

And soon I found the most important piece of my Coast to Coast puzzle, someone who was willing to do it with me. Or someone who was foolish enough to take my word for it that it would be a grand adventure worth taking.

My very dear friend Diane was up for both the challenge and the time commitment. She started training immediately, logging miles in the evenings and on the weekends back in Arkansas while I kept up a routine of walking in Scotland and wherever else I happened to find myself.

We both wondered if there was any way to ever be really ready for the challenge of walking long distances for many days strung together in a row. There were many unknowns for both of us about what it would really be like.

I did a sixty mile walk in the spring over five days, a bit of a teaser. A practice walk. I was simultaneously pleased to complete that walk and alarmed at how hard it was for me to get through the long walking days. I returned from St Cuthbert’s Way in May more determined than ever to keep up a regular walking habit, to get myself really ready for this Grand Adventure of walking Wainwright’s Coast to Coast.

All the other walks of this year were in some way preludes to this one, informing me about my weaknesses and preparing me for what might await. I walked all kinds of terrain in all kinds of weather. I tried to ignore the new aches and pains I discovered with each walk. Diane and I would text each other pictures of our feet on the pavement, encouraging each other to keep on walking from half a world away.

There’s something kind of wonderful that happens when you say, “Yes. I will do that.”

The exhilaration that comes with a commitment to a date on the calendar, a purchased airline ticket, and maps and guidebooks in the mail from Macs Adventure all worked together to turn a seed of an idea into a real event, one for which I was both excited and nervous to arrive. 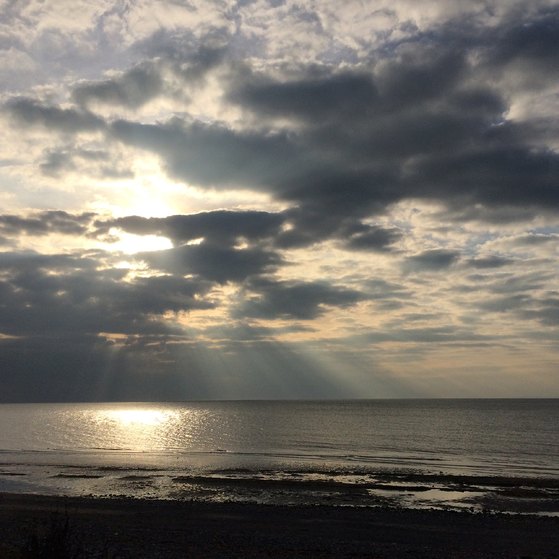 I love that feeling.

Once you say YES, you have an adventure waiting for you. It’s no longer hypothetical, but now there is an actual moment in time to which your spirit rises over the weeks and days leading up to it. You have a season of preparing, which for me always leads to a feeling that I will never be prepared. But the days pass anyway, the ones where you do a long walk to get ready and the ones where you do not because life was busy. And whether you walked every day or every other day or once a week, the days all pass by and eventually, the moment arrives.

Diane’s plane brought her across the Atlantic. Three trains took us from Aberdeen to St Bees, and then all of a sudden, we were sorting our gear in a bed and breakfast, lacing up our boots, strapping on our packs, and walking out into the cool of a September morning down to the Irish Sea. 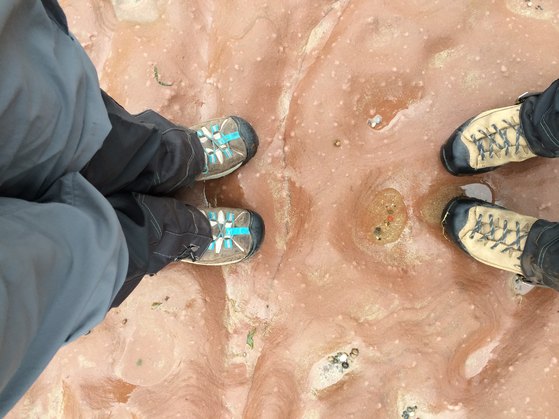 We dipped our boots in the sea and selected stones to carry across England, traditions long kept by many other Coast to Coast walkers. And then as the gentle breeze picked up, we began the long march up the cliffs.

It was this moment to which we both said YES all those months ago, a YES I first said in my heart on the shores of Buttermere and again when a new friend showed me photos on his phone of his own long walk.

And a YES I repeated every time I went for a walk this year. 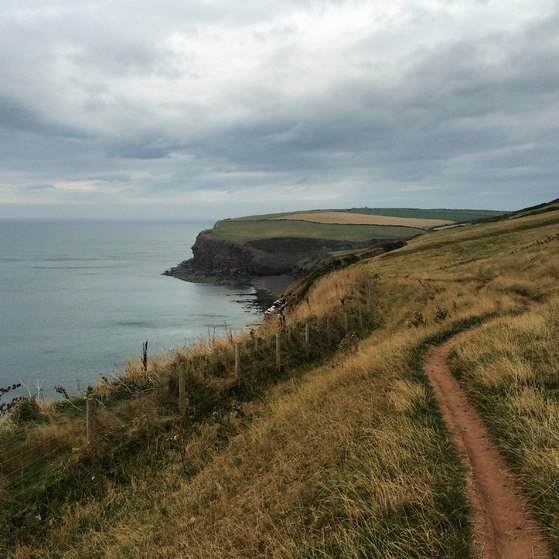 And so it began. An epic journey of small steps, one foot before the other over and over again.

In this minute, there was only this first mile. This path before us, waiting for us to walk it.

And now I think how beautiful they were, those first few steps, taken in faith that they would convey us on a journey worth our time and effort. And isn’t it also true that most great journeys begin this way, with a step? And then another one. Small affirmations that we are on our way to somewhere, all part of the larger affirmation that to lace up boots, open up the door and walk out into the world is a brave and marvelous way to live.