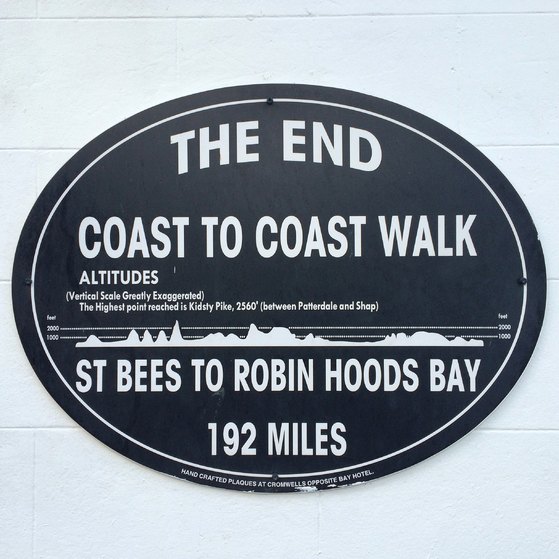 Lying in bed shaking with fever.

Wondering if I will ever get warm enough to fall asleep.

Please Lord, help us to finish this.

Help us to wake up and be able to walk tomorrow. 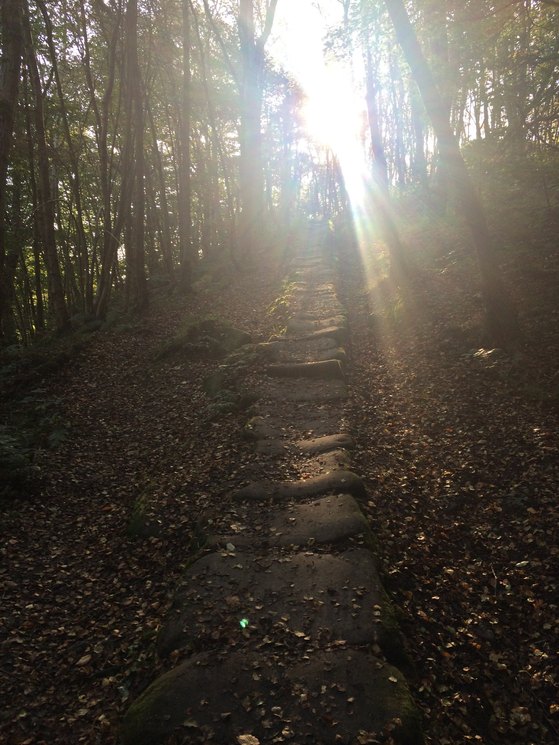 From the onset of this two hundred mile journey, I tried to predict which of the thirteen days of walking would be the most difficult for Diane and me.

Reading through many walking logs on the Coast to Coast, I decided that it would be around day 4 or 5 that I would really struggle to finish. By all accounts, once the hills of the Lake District were behind us, it would be smooth sailing.

All downhill from here.

But that was not the case.

So if the most difficult day was not in the first week, while my body was becoming accustomed to the long hours of walking, then perhaps it would be the long day. The near marathon distance of 24 miles. If the distance did not get to me, then perhaps the monotony would.

Predictably, my hardest day on the Coast to Coast was not one I would have ever guessed.

It was Day 11. Where the heights were half what they were in the Lakes and the distance was a mere twelve miles. Half the distance of the previous day.

Even as I write those words, I think. What happened? How could such an easy day have felt so terribly difficult? And honestly, I am still not sure.

But I think it has a little bit to do with expectation.

After climbing the heights of Day 2 and crossing the length of Day 10, I expected Day 11 to be a cake walk.

Diane and I both felt a little weary when we woke up on Day 11, so we got a late start, but we thought it was for the best, because we didn’t want to arrive at the other side so early that we could not check in to our accommodations.

This stage of the walk was through the Cleveland Hills. Hills that top only 500 meters (1,640 ft). Just. Hills. Not mountains.

But from the first uphill steps, I was dragging. I moved in slow motion through the cloudy day as we entered our third national park. The North York Moors. Long stretches of already bloomed heather crossed by an endless snake of a dirt road. A dirt road that crawled up and down the hills like an eternal letter W. Up. Down. Up. Down. More than once I looked to the left and wondered if we should find a road in the valley to walk on instead. But then I would deceive myself into thinking that it would be easier to just stick to the trail.

I was nearly on the ground crawling up the hills. And every time we would crest one, I could see more of them stretched out in front of us and I would just roll over on my back in defeat.

We made snarky remarks to each other and were impatient with others on the trail.

Which we later felt badly about.

But in the moment? In the weary wilderness of the North York Moors? We were unrepentantly grouchy.

The fatigue was so deep that it was making us nauseous. So in addition to being our hardest day, Day 11 also marked the moment that we stopped eating properly. We would force down a bit of bread or fruit or granola, but nothing tasted good.

Nothing sounded good. I could no longer be tempted to the end of the day by the pint of ale waiting in the pub. And Diane had long since given up her candy bars.

If I was to chart our moods on the Coast to Coast, the dip on Day 11 would be striking. It all fell apart somewhere between the Park House B&B and the parking lot on the side of the road twelve miles later where we would await our ride to an inn for the night. We got cold while we were waiting, and neither of us ever seemed to recover. We forced down a bit of dinner, popped painkillers, filled hot water bottles and shivered in bed until blessed sleep found us.

We both later confessed to lying in bed and thinking we were going to have to give up the walk with only two days left.

But sleep has this amazing way of replenishing. It’s a miracle truly, how different the world looks after a night of sleep. We both woke up ready to carry on, still weary, still feeling like the miles ahead of us were too many, but that at least this morning, we could put one foot in front of the other again.

Back into the moors we went. 19 miles of walking the same dirt road through the same heather fields. The pheasant and grouse we were delighted to spot a few days ago now crossed our path without comment. I did not want to die on Day 12 like I did on Day 11, but it was not a joyous day. It was a solemn march, a pushing through. We felt that we would make it, but just barely.

Diane could hardly touch food and she shunned the cups of tea as well. Three days later, once we were safely home, we decided that we had caught a stomach bug. But now I wonder if we had not just pushed our bodies beyond what they were capable of and so they rebelled back in whatever way they knew how. Weak stomachs and chills might have been the symptoms of exhaustion instead of the cause. I suppose I will never know for certain.

We both felt deliriously happy to make it to Red House Farm in Glaisdale. Our host told us there was a pub in town we could go to for dinner, but instead we had packets of soup in our room and fell asleep before 8pm.

The next morning we actually cried as we prayed together that we might make it to the end. Then I posted a pitiful little message on Facebook asking for more prayers.

At breakfast, we choked down a bit of yogurt and cereal. We felt none of the exhilaration we should have at its being our last day, which puzzled me but our hosts said it was not at all unusual. I appreciated their unique perspective of hosting people who are at the end of the Coast to Coast. They said often walking partners are no longer speaking to one another by the time they reach them. Diane and I laughed felt grateful that we were both still very glad to have each other. Without one another, we neither of us would be able to finish. 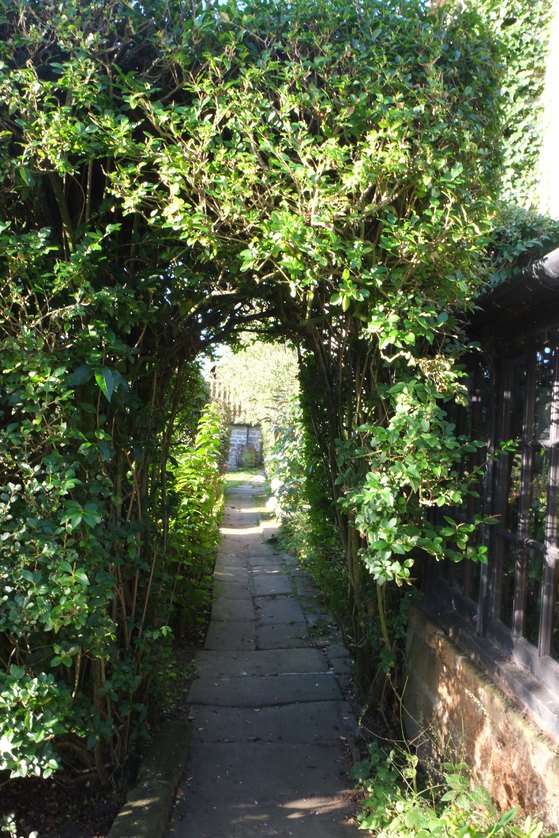 As we left Red House Farm, our host slipped me the phone number of a cab company and said, “Just in case you can’t make it. And you know, no one ever has to know.”

I smiled and pocketed the number, knowing that even if I consented to calling a cab, Diane would not. We would drag ourselves to Robin Hood’s Bay even if we were hanging on by our fingernails.

But neither of us felt like we had twenty more miles in us. I wondered if we could go for even half of that on the little amount of food we had managed to eat. 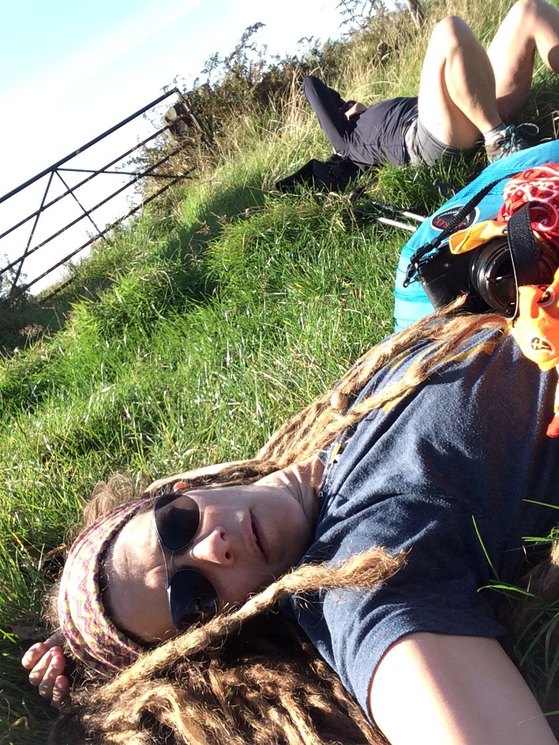 Five miles down the road we were lying in the grass at the top of our first big hill.

We could see the North Sea clearly but Wainwright’s route would have us walk over fifteen more miles before we reached the end. Our book detailed the beauty of this route. It would wind through a forest, take us north over a couple more hills and then descend south along the coast for two miles before coming to Wainwright’s Bar in Robin Hood’s Bay.

Forgive me when I tell you that when I took everything into account, Diane’s stomach, my blisters, the almost two hundred miles behind us, the two weary days of marching through the North York Moors, the tears from that morning at breakfast, I looked at the winding route of the last day of the Coast to Coast and I thought,

I pulled out my phone and Google Mapped us to Robin Hood’s Bay.

I looked at Diane and I said, “Listen, if we walk on the road and just head east for the sea, we are under ten miles away.”

Sweet relief washed over her face, and she stood up with more confidence that I had seen in three days of walking.

“You won’t feel like I cheated you out of part of the walk?” I asked. 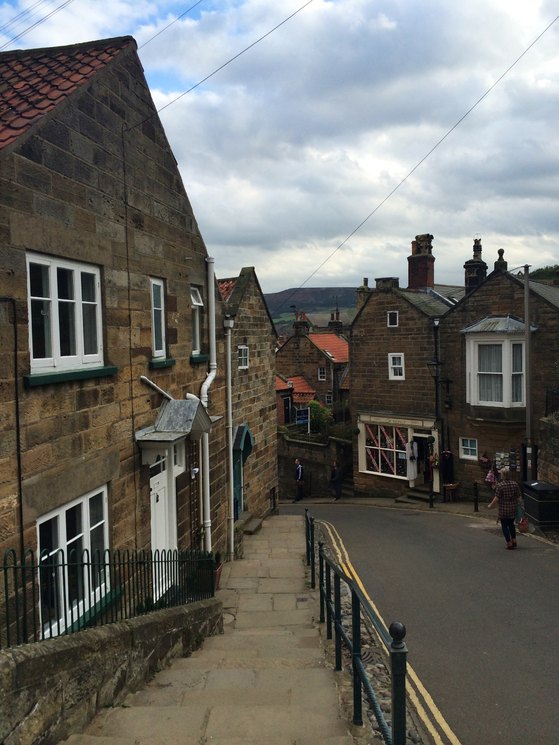 A few hours later we came over a hill and could see the sweet little village at the end.

Tears filled Diane’s eyes as we squeezed each others hands.

Neither of us, could quite believe it. We had almost walked across England.

Down the streets of the darling little town we walked. It was full of people dressed in normal clothes instead of walking gear, folks who had no idea how many miles we had come to be on these streets.

But when we reached the sea, our friends were there. Familiar faces cheered for us as we dipped our boots in the sea. 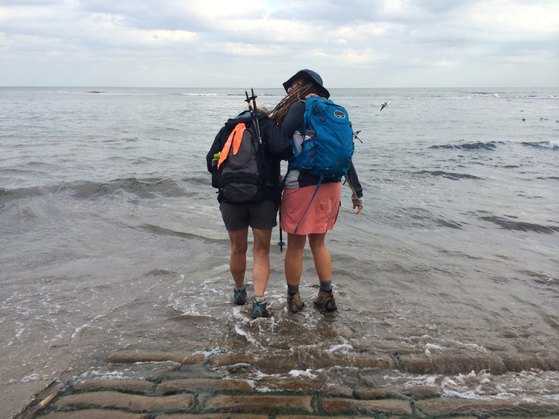 “We made it!” we both squealed to each other and to everyone else.

We were so overcome that we forgot to toss our pebbles in the water that we had carried all the way from the Irish Sea. It was not the victorious end I had imagined. The one where we come running the last mile across a finish line.

Every day folks walk into this unsuspecting town, meander down to the sea and sign the register of names full of folks who have done this walk. It’s a bit anticlimactic actually. One feels there should be a marching band and cheering angels awaiting your triumphant finish of walking 200 miles. 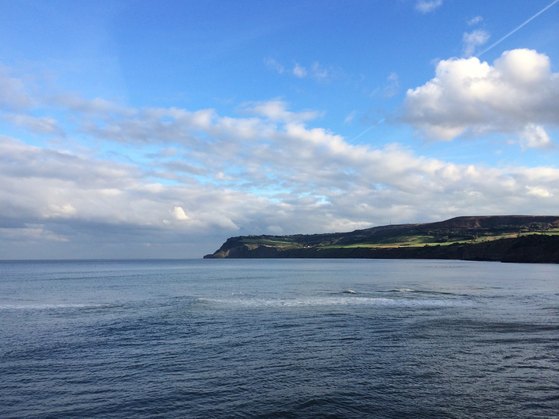 But instead the walk ends in much the same way it begins: standing and staring out at a sea, feeling small in the face of the horizon that stretches beyond your vision and wondering at the wide and beautiful world. There’s so much of it to explore and though you feel you have crossed a long stretch of this world, it’s just a drop in the bucket compared to the miles that wrap the globe. Forests and mountains and rivers and oceans untold. The world is bigger than I could ever imagine, much less walk.

And in that moment, my exploring is done. I can gladly go home and walk the familiar trails around my house, the ones I know and can complete without too much effort.

I never wonder if I will make it back home when I am out walking in my neighborhood. 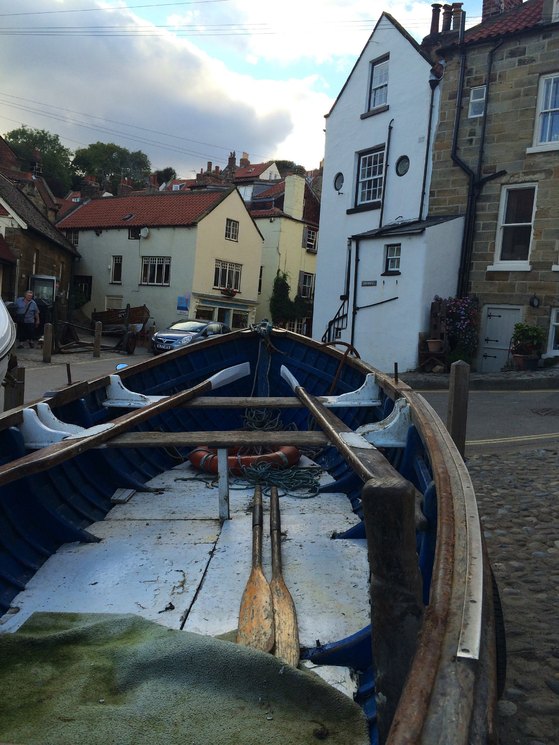 So that’s what I will do until the urge to see a new part of the world on foot bites me again.

I know it will happen.

I will again wish to see if I can walk further than I am physically prepared for.

I will take myself back to the place of wondering if I’ll be able to finish something, because the suspense will be killing me. 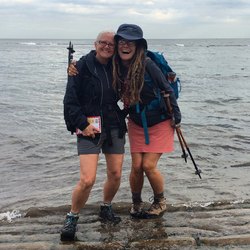 Our Coast to Coast walk was made possible in part by the good folks at Macs Adventure, who provided the maps that we completely ignored on our last day of walking, and who should in no way be held responsible for our tendency to get lost or our ridiculous YouTube videos.