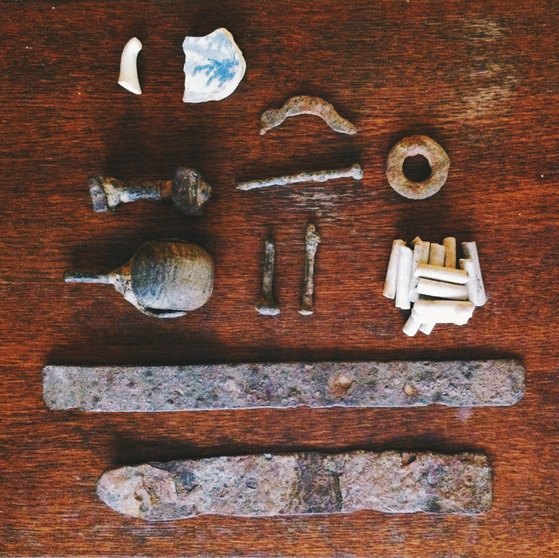 Simon was waiting for me as I got my usual pat down in security.

(My dreads always have to be manually checked to be sure I’m not hiding something in them.)

We both walked over to where his backpack had been flagged.

The man behind the counter pulled the long, rusted piece of metal out of a plastic bag,

I looked at Simon to see if he was going to answer.

He began quietly, “Well, it’s something we found by the river…” he looked up at me for help.

“Well, you see, Sir, we went on a tour of London today and as part of the tour we went ‘digging for history’ (air quotes) down by the Thames and that bag of spikes, nails, rocks and clay pipe fragments is what we collected. Our guide told us that it’s all really old, like two to three hundred years old. And actually you can tell that this piece (pointing) was made by hand, like by a blacksmith, because of its uneven edges.”

Raised eyebrows from the security guard as he put all our treasures back in the bag.

“Just a minute,” he said. He took the bag to another counter.

We had told him it was a long shot that we would be able to get all of our newly acquired historical artifacts through security at the airport. 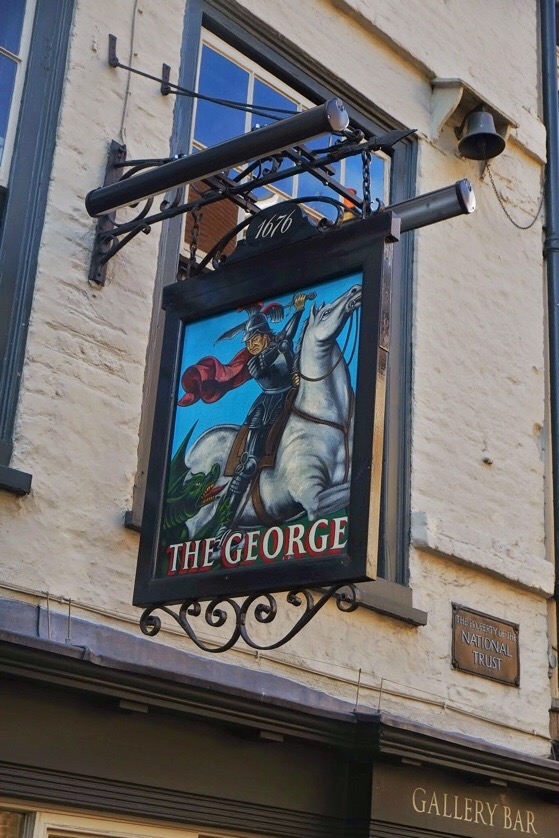 We sat down with Dr. Jim Harris on Sunday morning in the courtyard of The George Inn in London.

He told us a little of his own background. He is a professor of art history at Oxford, and before that he was an actor in London. Then before we set off on our walking tour of London, he asked us about ourselves and our interests.

When Simon mentioned that he really likes dragons, Jim told him that we were going to see a lot of dragons. And in fact we were already sitting near a dragon. The George Inn is named after the legend of Saint George and the Dragon, a tenth century tale of a saint who killed a dragon.

“Go and have a closer look at that sign and you can see the dragon in the corner.”

This was the first of many times over the next several hours that Jim would draw Simon into learning by helping him observe the world around him.

We left The George to walk through part of Southwark, which was the seedier side of the Thames in Shakespeare’s day.

Technically on the outskirts of London, once you crossed the river into Southwark, you could engage in the sorts of past times that were not permitted in the City of London.

And one of those activities was going to see a play. 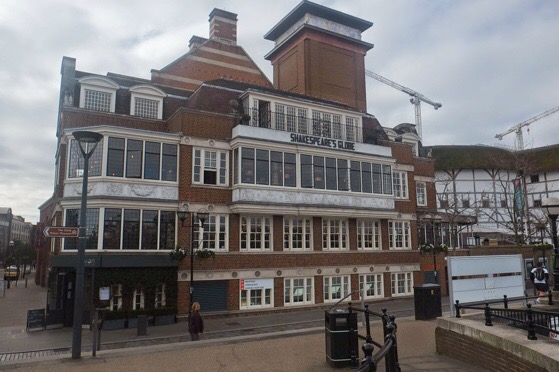 The official title for our walking tour was The Evolution of London Theatre, but many other stories came into the telling of the story of the theatre, so we received more of London’s general history in the bargain.

But it was also fun to see where playacting actually began in London, as well as where it is today. There is an authentic replica of Shakespeare’s Globe on the South bank of the Thames River today, but it is only about twenty years old.

The original Globe is long gone but its place is still marked in this apartment courtyard. 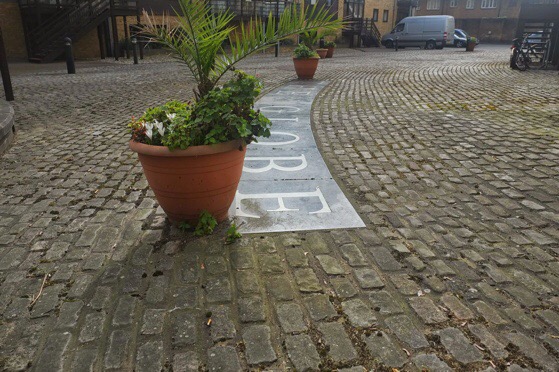 So much of London’s famous roots are marked like this, small reminders of a long and varied history. 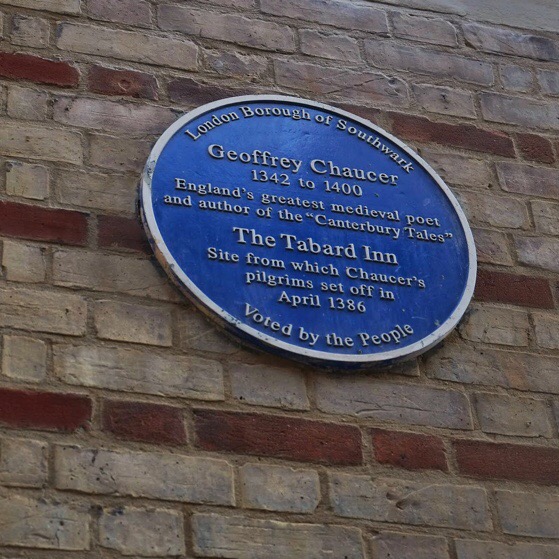 And many more have been forgotten and are buried unmarked beneath buildings.

Often when a new structure goes up in London, discoveries are made in the laying of foundations that are then excavated and preserved.

Jim told us how he used to come to a construction site where the original Rose Theatre (Rival to Shakespeare’s Playhouse) had been discovered. He and his friends protested with others that the theatre should be preserved beneath the new building and their requests were met. You can tour the excavation site today. 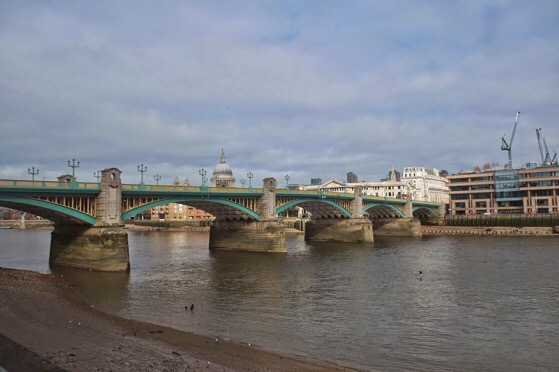 So much of London’s history revolves around the river, and so Jim took us right up to it to find a story or two of our own. 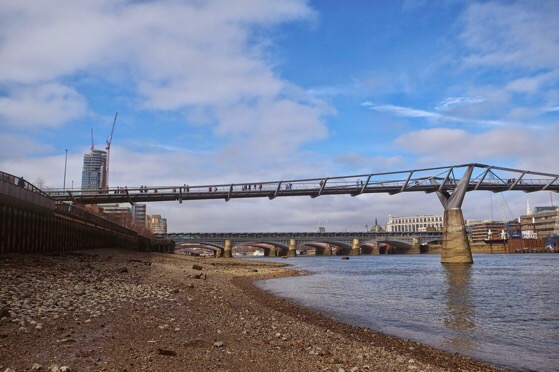 He encouraged us to just look along the shore and pick up remnants from the river. 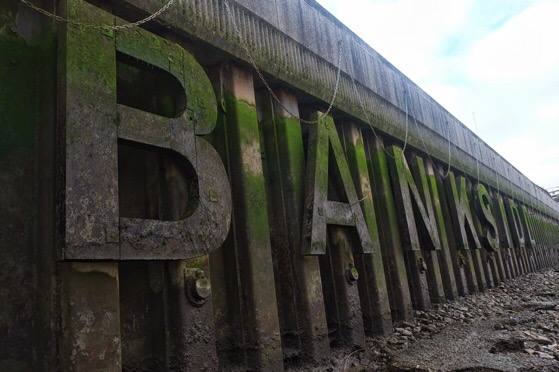 And it turned out that the metal bits at our feet had stories to tell. 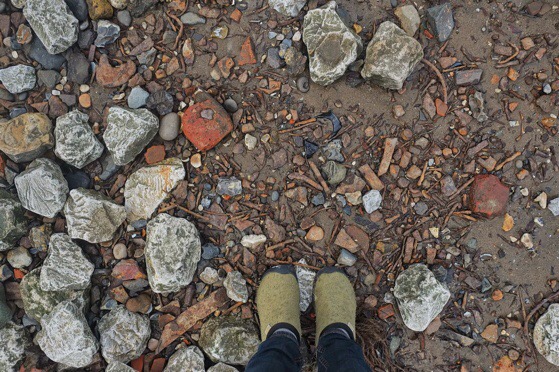 Simon would pick something up and show it to Jim, and he would make up a possible scenario of how the wooden caster or iron spike made its way to Bankside. 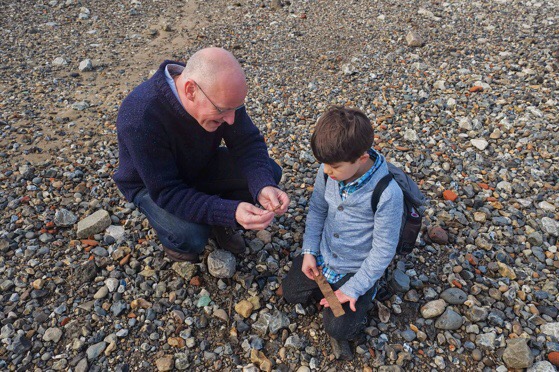 Then Simon would pass on his new knowledge to us.

He filled his backpack with his river collection, but some pieces had to stay behind. 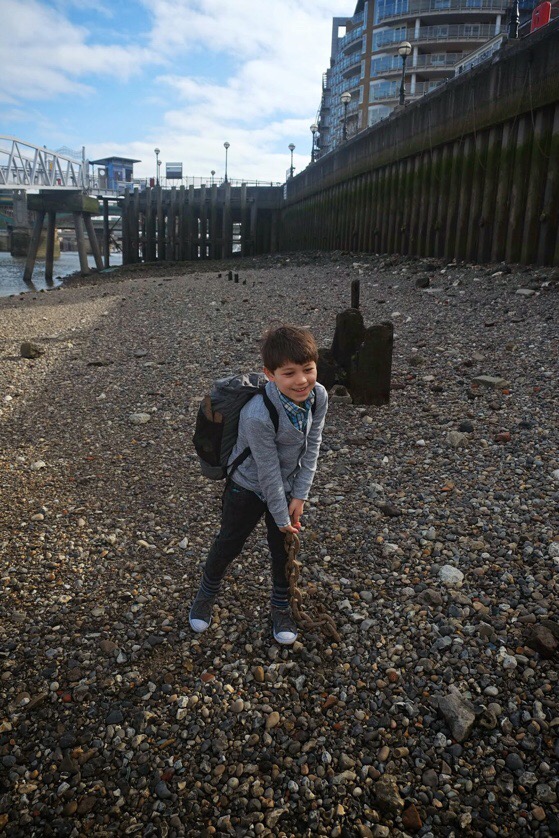 Jim brought to life in words a picture of the Thames as it was long ago, a river that used to freeze over in the winter.

The original London Bridge was like an entire town on the river, and it could hold back the flow of the river enough to turn it into an ice skating rink.

We heard how Shakespeare actually built his theatre on the other side of the Thames, but then disassembled it and brought it over to Southwark in planks across the river.

Back on the river bank, the clay pipe stems that look like cigarette butts were our most common find, left by folks tossing their pipes into the river hundreds of years ago.

These “penny pipes” that were smoked between the 16th and 20th centuries were filled with tobacco when purchased, so they were practically disposable. The pipe bowls are easier to date but we didn’t come across one. Maybe next time. 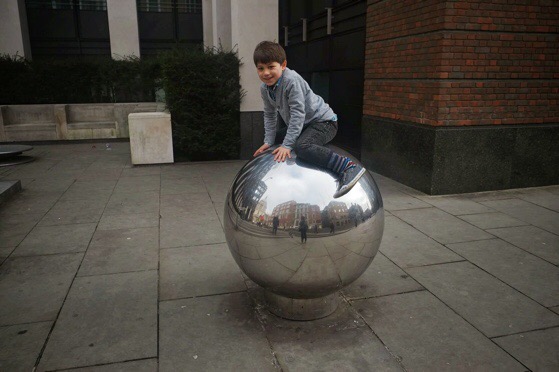 We could probably have stayed down by the river for the rest of the day, but we had many more stories still ahead of us.

After the river we warmed up for a minute with a coffee and then we walked on, making stops for playing around whatever we passed of interest. 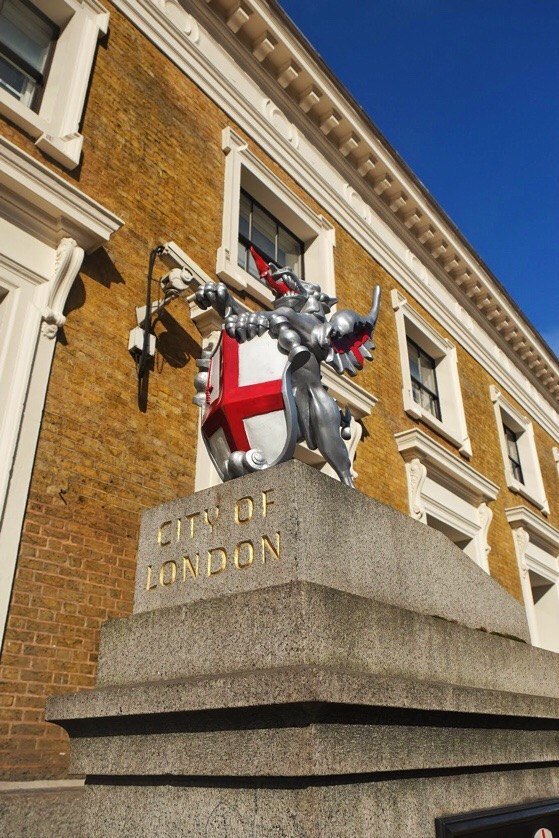 And of course we stopped for dragons.

All the entrances to the City of London are marked with dragons, a detail I had never noticed though I have visited London several times.

I loved seeing the city from the perspective of a Londoner and hearing stories of outrage over plays depicting real life scandals and modern day references to brilliantly mad directors. 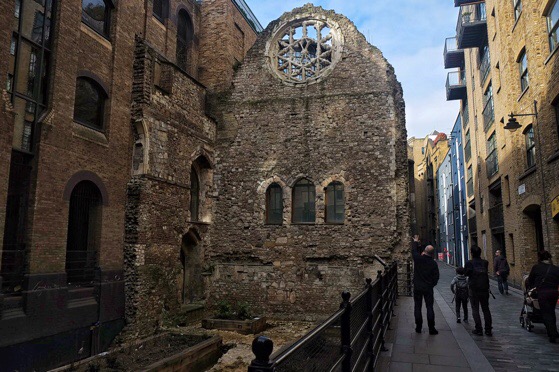 When the security guard returned with Simon’s bag of contraband from the river, he handed it back to him and said surprised us by saying he could take it on the plane.

He could not wait to show it to his siblings when we got home, holding up one piece at a time and explaining to them what he had found in London. 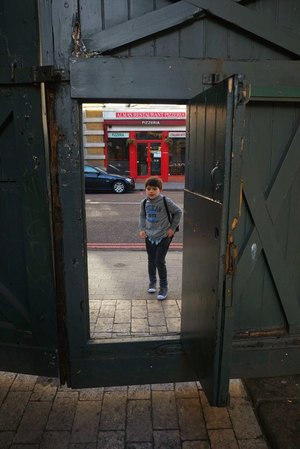 Our anniversary weekend in London was Taido’s first trip to London, so we wanted our time to be full of things he would enjoy. And we promised Simon legos and ice cream along the way. But we were delightfully surprised by how much we all three enjoyed our Context Travel London History Tour. Simon was sad to say “Goodbye” to Jim and he drew pictures of dragons to post to him when we got home.

Context Travel offers many different tours of London (as well as other cities). They gave us our tour as part of a blog exchange, and we loved our experience so much that we are booked to do another one in Amsterdam next month.

Our trip to London was made possible in part by Travelodge. We stayed in a family room in the Covent Garden Travelodge. You can see images of our room on this six second video.