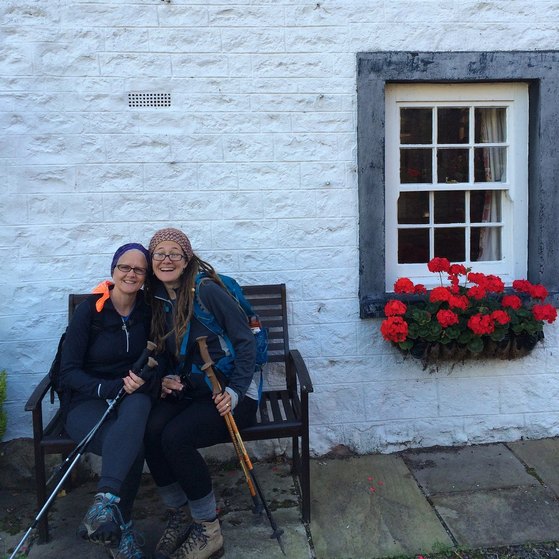 I have always maintained that making it from Point A to Point B on a long walk is more of a mental game than an endurance test. Physical strength definitely comes into play, but I believe your mindset wins the day when it comes to covering the distance.

Wainwright’s Coast to Coast is 196 miles long. Diane and I were averaging fifteen miles a day, so there was not a single day that I would have considered short by my normal walking standards.

If I walked out of my house right now and traveled on foot for eight or nine miles, I would return saying that I had been on a long walk.

But on the Coast to Coast, something happens in your brain that makes you look at your schedule and heave a sigh of relief when it says there are only twelve miles between you and your next destination.

The inverse is even more true. Seeing anything nearing the twenty mile mark could easily make me feel disheartened before I had even begun.

So on the longer days, Diane and I felt that it was important to have some strategies ahead of time that would give us the impression of being on top of the day before it got the better of us.

For starters, we would greatly overestimate how long the day would take us. We learned early on that we might still be walking at sunset, so we would celebrate the “early arrival” if we finished a day before 6pm.

Also, we had a lot of treats. Diane brought a pile of candy over from the US and I had my favorite granola bars. The simple suggestion that in twenty minutes we might stop for a candy bar would put a temporary spring in our steps. After the first day of running into our friends having tea on the side of the trail, we began to carry our own flask of tea. We would wait until we were particularly weary in the afternoon and stop for our little pick-me-up.

I have to admit that tea and candy were really only helpful on the first week of the walk. By the end, if Diane suggested a candy bar, I was all, “Ugh, gross.” And she said to me on the last day, “England has about ruined me for tea.”

Those were the words of some weary women, folks, considering that I am not ever likely to turn down chocolate or caffeine.

Day 10 was our longest day: From Richmond to Ingleby Cross.

It was listed as 23 miles. But then our bed and breakfast was actually a mile past Ingleby. And there was a detour. So at the end of the day, I think we walked an actual marathon.

Even before we found out about the detour, we knew that 24 miles was going to be a killer. Part of the reason that it is the longest section of the Coast to Coast is that it is flat and dull. A lot of the walk is on roads, connecting you from the gorgeous, green Yorkshire Dales to the wild and wonderful North York Moors, two exquisite national parks in Northern England.

One of our bed and breakfast hosts told us to just get a taxi. “There’s just no point in suffering that distance for less than beautiful scenery,” he quipped.

But we were determined. We asked other seasoned walkers for advice and the general sentiment was that you could get away with wearing tennis shoes instead of hiking boots. Or trainers, in English speak.

So we opted to ditch our boots for the day. We thought we might even run a bit. We also went as light as possible in our packs. I left my big camera behind, as well as some of the other tech-y equipment I had been carrying along. Also, we left out a couple of layers since there were no mountains to be crossed.

But all these strategies paled in comparison to our real plan for getting through the long miles ahead,

Singing Through The Miles.

We had been thinking about it for a couple of days. We were already having way too much fun making our daily update videos, and we knew we wanted to spend a day recording the many songs we sang along the Coast to Coast.

Diane and I both grew up singing songs around campfires and between the two of us, we knew a few lines to a lot of tunes (and very few songs in their entirety).

We got an early start and started the day with every song we could think of that had the word “morning” or “sunshine” in it.

Then we moved on to singing songs about trees, cows, sheep, farms, fields and flowers.

Once we got on the road, we sang classic road trip songs.

We sang Sunday School songs and old camp songs. We sang the songs from our childhoods and then the ones from our adolescence.

We went through musicals and hymns and even a little R&B.

I really cannot think of a day that we laughed as hard as this one, even though we were beyond exhausted by the end of it.

We often said on the Coast to Coast that we were not the fastest or most experienced walkers on the trail, but if someone was giving an award for who had the most fun along the way, well, we might have won that one.

Here’s our video of our long day strategy. It is only a small sampling of all the songs we sang on Day 10, but it’s been our most loved video, and by the end of filming it we were on the ground laughing. Literally. We hope you have a laugh at us making total fools of ourselves on the long road between Richmond and Ingleby Cross.

If you take long walks or runs, I would LOVE to hear your best strategies for passing the time when the miles stretch on endlessly? 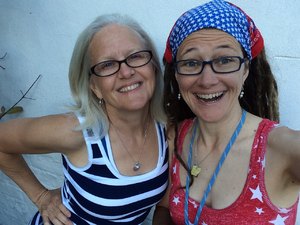