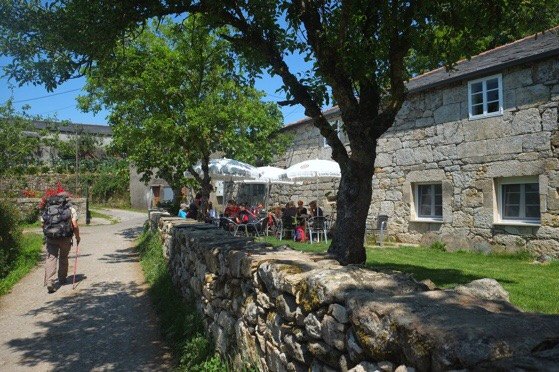 Jerry, come and have a look at these girls.

They already have their seashells on their packs and they haven’t walked one step of the Camino yet.

They’ve already been to the Pilgrims’ Mass!

Two brothers, ages 67 and 70, had completed all but the last stage of the Camino de Santiago.

In pieces they had walked, returning to Spain over the years to cover portions of the 800 kilometer journey from St Jean Pied de Port in France to Santiago de Compostela.

I loved meeting people who were walking the full Camino this way. An admirable kind of patience is required to finish a journey in stages, especially at a season of life where you perhaps feel your age more with each passing year.

We had this set of brothers in fits of laughter, four girls who had not yet seen a day on the trail, up late in the hotel bar, chasing our dinner of Sangria and pizza with cocktails before a day of walking over 20 kilometers.

No one ever accused us of being the wisest walkers on the road to Santiago,

but we earned a reputation for being friendly, a badge of honor I’ll wear proudly any day. 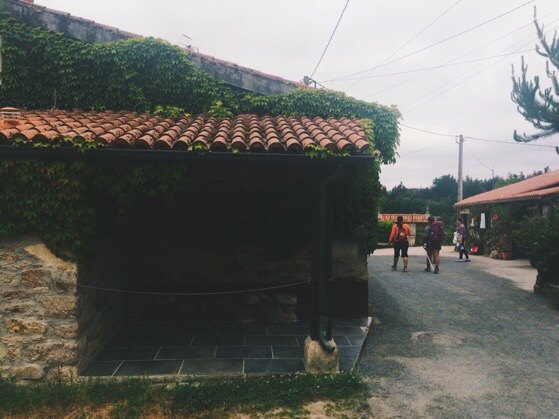 We met lots of Pilgrims who had been walking for many days, having begun some time in May at the beginning in St. Jean Pied de Port.

And we learned that when you meet folks who have been walking for a month with their possessions on their backs, you just want to honor their accomplishment.

Some of them welcomed the distraction and seemed ready to make friends with fresh faces.

Others were weary and perhaps slightly annoyed to be sharing the trail with loads of new folks who were full of energy  and blister free. Some of the long haul pilgrims began to find it hard to find a bed at night because they were all booked up.

I was in awe of anyone who had been walking since the beginning. I remember how desperate Diane and I were to be done with the Coast to Coast after only two weeks. If I was coming in on the home stretch of an 800 kilometer journey, I would want a cheering section.

And the four of us, well, we made a mighty fine cheering section if I do say so myself.

However, as we began to be aware of how far people had come on their pilgrimages to Santiago, we would answer a bit sheepishly when asked about our starting point,

Of yes, of course. That explains everything.

We had begun at the end. We were only walking the final stage of the Camino from Sarria to Santiago. 110 kilometers.

Just enough to earn a Compostela.

No Pyrennes to climb and no bunk beds at night.

No sleeping in fields or carrying all our possessions. (We used a luggage transfer service.)

But on the fourth day, we met an American lady who had done the Camino several times many years ago and now returns frequently to volunteer along The Way. She was working in an Albergue for the summer via an organization for American Pilgrims who want to keep in touch with The Camino.

She encouraged us not to say, “Just Sarria,” as we talked about how many days we had been on the road. She told us to embrace our pilgrimage as our own.

There’s no right way to do the Camino, she said.

After that we began to claim our journey for what it was. Ours.

And we encouraged the many others who were walking to do the same. 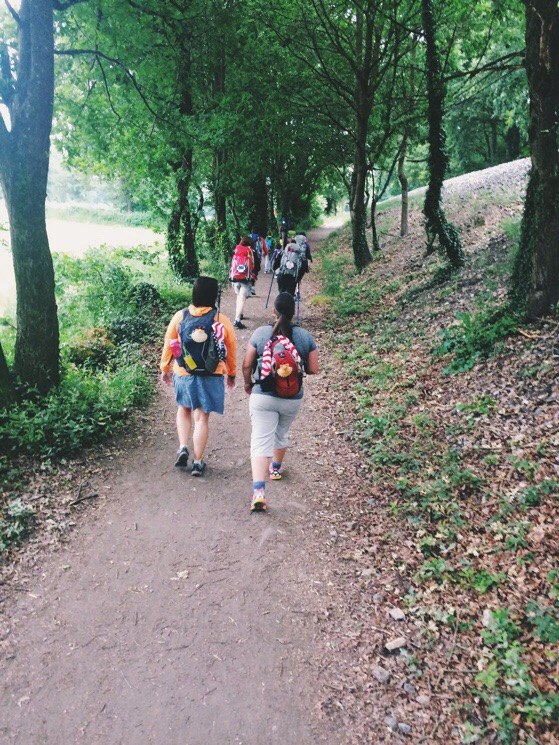 No Strangers on The Camino

The lovely gift of being in a group of four walkers is that if someone wants to talk, there is someone to talk to, but it someone wants to be quiet, well, that’s ok too. The other three can carry the conversation.

You could kind of tell when someone passed you or when you passed them if they wanted to talk.

Or if they did not.

You could get a vibe.

They might have their head down or even headphones in. They might be trying to keep a really quick pace.

I was content to leave a person to themselves if they only wanted to quickly mumble the trail greeting and keep on:

Sometimes a pilgrim would barely utter the words, from either tired or hurried lips.

And we always all four returned the response. Like a chorus, we would say it together or staggered.

Buen Camino! I would say.

And then LynEtte would find their eyes. She let no one pass without making eye contact and asking them something.

I would turn around and a person who I thought wasn’t wanting to talk would be sharing a piece of their heart with LynEtte.

She would be mesmerized, often in tears.

I loved that she pushed through peoples’ barriers, a gift she has honed through years of raising a child who requires her special brand of perseverance.

It was difficult to get by us without getting some attention from at least one of us. If LynEtte was already talking, Diane would invite in the next pilgrim we saw.

Come and share the road with us for a while. 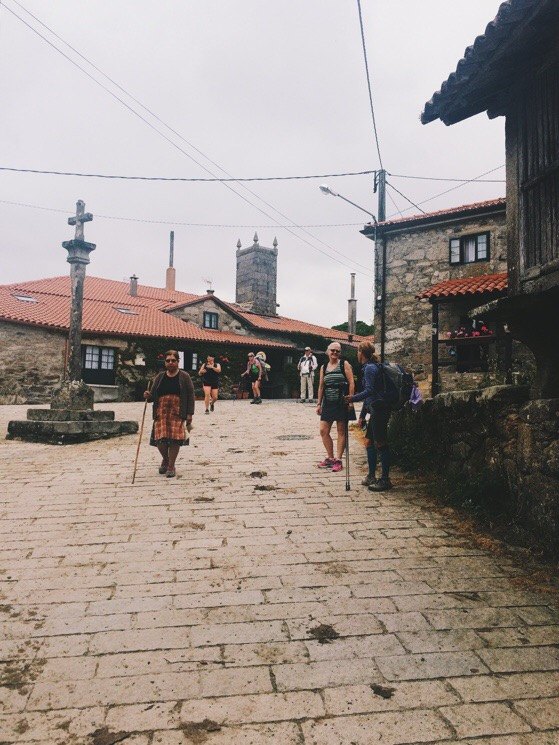 I’ve already mentioned that one of the best places for making friends (and for meeting them again later) was at all the stops along The Way.

We made friends by sharing our food with others at tables.

We had brought too much food in our suitcases and one night Stephanie and I loaded up a bunch of it and took it to an Albergue to share it with others.

At our tables we were quick to stick our forks in each others’ food to share tastes of new foods.

We broke pieces of granola bars and candy and whatever else we had and handed it to anyone who was around.

Diane was putting her essential oils on anyone in pain or in need of a little refreshment.

What do I have that you need? has always been one of my favorite questions to ask a friend.

And on the Camino, we offered that question to strangers as well as friends.

And it is especially delightful to find someone who is willing to return the question.

Oh you poor thing. You must be starving. Look, here take this bread too.

That’s what the precious gals in this photo said to me after I finished eating their paella, standing up on the street, serving spoon scraping the serving dish to get every last bit.

Do I have anything else I can give you?

I wasn’t starving. I mean I was hungry, but really I was just salivating over the paella on this street cafe as we passed by.

We had already determined that we were going to eat pizza around the corner, but I wanted that paella.

And these girls saw it on my face.

My hesitation to pass by.

Look, it’s really good. Like the best paella we’ve ever had. You have to try it.

Y’all I turned around and Alison was eating off of a total stranger’s spoon.

She fed me the first few bites. And then I took the spoon and finished the rest. And as if that wasn’t enough, I wiped the dish clean with the bread that was left. And then had a glass of wine.

All while standing up, just passing by.