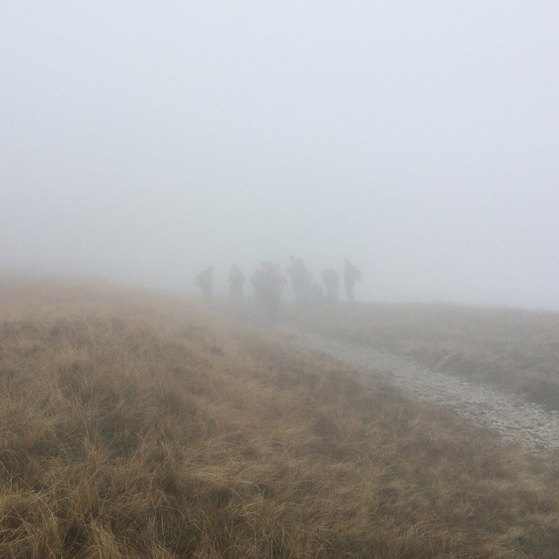 One of the great joys of walking the Coast to Coast with an extrovert was that we met tons of other people along the way.

Diane was always willing to say, “Hello. We’re walking the Coast to Coast. How about you?” Endlessly enchanting in all her Southern charm, Diane has a beautiful gift of being endearing without even trying.

Also we were fairly conspicuous so we often did not need to introduce ourselves. Mainly because we laughed. A lot. In fact, one afternoon we collapsed on the side of the trail, about a mile from the end. We made a video sitting in the grass and we were cracking ourselves up so much that we could not recover enough to get up and walk the rest of the way into town. As a result, we sat there for over half an hour, serving as a bit of a congratulations party for all those who came behind us.

“Hiiiii! You’re almost down now! Well done! How has your day on the trail been?”

Diane yelled all these phrases between giggles. By the time we drug ourselves into Patterdale, a group of walkers in a beer garden were laughing about two girls “sunbathing” on the grass near the end of the trail, and assuming we were high on something more than just mountains.

Nevertheless, our willingness to laugh at ourselves along the way opened us up to more than just ridicule. We met so many fellow Coast to Coasters that Diane started keeping a log with all of their names.

The warm and fuzzy feeling that is conjured in my heart by this list of names and stories from (or about) the other walkers was probably the biggest surprise of doing the Coast to Coast.

Diane always asked people why they were walking the Coast to Coast and there were as many answers as there were people:

A couple from Hawaii had walked it last year, and it had been their favorite thing they had ever done, so they came back this year to do it again.

Two flight attendants from Seattle were celebrating an early retirement buyout from their airline.

A man from Australia was walking in honor of his wife, with whom he had previously walked the trail three times before she died of cancer. He made us all cry as he carried and scattered her ashes along the walk. His new companion had come along in support of his journey, and her sacrifice was equally moving.

A fellow who has lived in Spain for over twenty years came back to the Lake District because it was his childhood home. He was connecting the dots between his memories and the present day. He and his girlfriend were carrying all their gear and just showing up each night trying to find a place to sleep. They ended up roughing it a couple of nights in rented tents and we found their courage admirable, but we were glad we weren’t doing the same.

We met two couples who were doing only half of the walk and planned to come back next year for the second half. They both lived within an easy train ride of the walk, so they could return at any point and do the bit they missed. This was a novel concept to me, but after watching them I have been considering the advantages of doing other national trails this way. I certainly might appreciate the later sections of a walk more if I was approaching them with fresh eyes, not to mention fresh legs. They’ve got me thinking of what it might be like to walk the West Highland Way over three weekends instead of in seven or eight days.

We walked a lot of miles with a gentleman who has made a sort of career of walking. He’s walked the Camino de Santiago three times. “But I’m still a sinner,” he said. He and I traded stories about being the son of a vicar vs a pastor’s daughter.

Two marathon runners were tackling the walk in 11 days. They found the terrain to be rather difficult and began to take roads instead of trails, adding considerable distances to their walk. One night over several bottles of wine, they confessed to yelling “Sod you, bloody Wainwright!” for most of the afternoon.

We walked only a few miles with a sweet couple from Milwaukee but unfortunately, it was one of the times we got lost and we led them astray. The husband was considerably annoyed with his wife for following us instead of following their own map, so we didn’t see them much after that incident. Oops.

Two boys from Bristol who worked together were doing the walk, but one was sort of leaving the other behind when they caught up to us. We walked with them long enough to slow the first one down so they could finish the day together. The older one told us he had just got married and was expecting his first baby this fall. He turned out to be only a couple of years younger than I am, which of course leads to the inevitable discussion of the fact that we often start families in Arkansas a lot earlier than they do over here in the UK.

We met several pairs of parents and children who were doing the walk together, a father and his daughter, a boy and his dad, and a gal with her mother. I loved watching these sweet pairs, and how the younger tended the older and vice versa.

Even though we met lots of people along the way, having meals or drinks with some here and there, we actually only started and completed the walk on the same day as one other set of walkers.

We met the group of twelve walkers and their guide, John, on our first day in Ennerdale Bridge. But since they were a larger group, we tended to avoid them a bit. We felt at the start of the walk like we would prefer to be either well ahead or behind them. But then about halfway through the walk, Diane began to try to learn one of two of their names whenever we encountered the group. Somehow, trying to meet them all had seemed too daunting but when she singled them out, we started to get to know them a little. So instead of being intimidated when we would come upon the entire group, we were glad to see them.

In fact, we began to sort of watch for them. We left many of the friends we’d made behind on one of our longer days that most folks had divided up into two sections, but the larger group was keeping the same pace as we were. In fact, more than once their guide set us back on track when we were headed the wrong way.

We felt a little lost on the days we didn’t see them, but most days we could spot them a bit ahead of us stopping for tea or lunch. They called us “Hey y’all!” because that’s how we greeted everyone on the trail, and they got such a kick out of the word “y’all,” saying it in a super exaggerated manner.

We actually finished the walk just at the same time as the group did, which made for such a lovely celebration at the end. We signed our names just behind theirs in the register in Wainwright’s Bar, marking the end of our time on the trail.

The next morning, as we were leaving town, we ran into a girl from the large group and she was in tears. She said she felt so silly, but that she was grieving the end and saying goodbye to all her new friends.

“I know,” I said. “It does feel a bit strange. We’ve met all these lovely people that we’ll probably never see again. I don’t think it’s silly at all to be sad.”

And even now as I think about Diane and I both hugging her goodbye, I think how lovely it would be to run into even one of the many people we met along the way on the Coast to Coast. It makes me want to hurry up and climb another hill just to see who might be waiting at the top of it.

Our Coast to Coast walk was made possible in part by the good folks at Macs Adventure, who arranged all our accommodations and luggage transfers and who should in no way be held responsible for our tendency to get lost or our ridiculous YouTube videos.