Stone-cold sober, she was more free in spirit than most people are three sheets to the wind.

I won’t be able to be at her memorial service today, but as my family has gathered photos and stories back home, I have been thinking about all my grandmother has given to me over the years. I cherish the days of learning to make blackberry jam in her kitchen at Chimney Cliff, but the intangibles that I’ve discovered in my heart as I’ve sat for a couple of days in a world she no longer inhabits are almost more precious than my scribbled recipes. 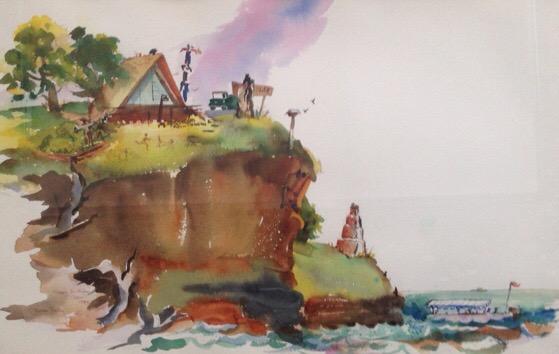 She taught me how to be an artist.

She actually taught me how to paint, but more importantly she set an example of a life as an artist that is important for me as a writer.

The fourth of five children, my grandmother grew up on a farm in Kensett, Arkansas. She decided early on that she was an artist, a calling that took her through many seasons of learning, ultimately becoming an accomplished painter of landscape watercolors. Determined to find ways to pursue her craft, she trained to be an elementary school art teacher while her brothers were working the family land and fighting wars.

She kept a world wholly unto herself by holding onto her art and relentlessly making time for it. It was a world that she opened up and shared with others, teaching art in school, giving lessons at her house and later on a public television show, Miss Polly’s Paintbox, bringing her gift of art to whoever would tune in. But it was still her world. There were paintbrushes only she was allowed to touch, and a revered easel where her current work in progress waited.

She often joined a group of traveling painters to spend a week away with other artists. They set up their easels in front of mountains in Colorado, red desert rocks in Arizona, many-colored bungalows in Mexico City and even the heather covered hills of Scotland. When I think about how she had to scrimp and save to make these trips possible and then try to sell her work afterwards to pay for the next one, I am in awe of her belief in herself as an artist.

One of the hardest parts of being a writer for me is the part where I market myself, either to a company or even to you, my reader. The part where I ask you to come over here to this little corner of the internet and read what I write makes me cringe every time. But Mama Polly was unabashedly proud of her work. She was constantly entering competitions and trying to have a painting included in an exhibition. She displayed her art all over her house and if you came over for a party (of which there were many) and you had your eye on one of her paintings, well, she was always ready to make a sale. Unashamed, she would pocket your money and put it towards her next holiday. 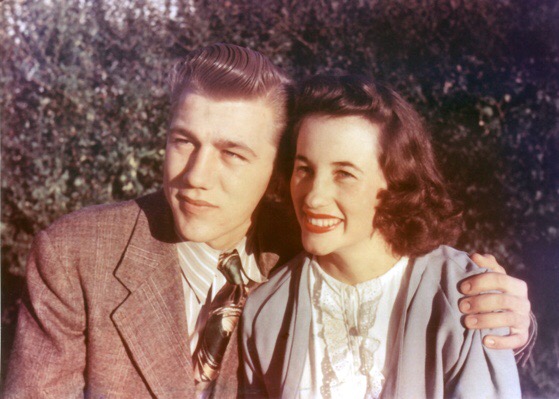 She taught me to follow my husband with blind faith. And to enjoy the ride.

My grandmother fell so hard for my grandfather when she met him that she hardly came up for air in the seven decades that followed. Even last week if you had showed her my Daddy Bill’s photo she would have told you how he was the best looking man in all the world. Her schoolgirl love for my grandfather, who was a giant of a man (in both stature and personality), caused her to chase him to California. She married him in a borrowed dress before he was shipped off in the navy during World War II.

Later they settled in North Little Rock, Arkansas where they had four sons, the third of which was my daddy.

My grandfather was a difficult man to cross, and my grandmother was happy to let his word be the last on most subjects. I wonder at how her spirit was not crushed by his personality but then I remember the small ways she maintained a world unto herself.

The family of six lived in a small house in a much loved North Little Rock neighborhood called Park Hill, and they did not have air conditioning. One summer while the boys were gone with my grandfather for a week of scout camp, she bought a window unit air conditioner against my grandfather’s wishes. When the boys came back from camp, nothing was ever said about it.

Years later, my grandfather quit his steady job, grew his hair out and started building a cabin in the woods.

My grandmother never missed a beat. She followed him in faith that he would continue to provide for them and soon after he finished building their dream home, an A-frame overlooking the river that she named Chimney Cliff, he opened an art gallery in the nearby town where she could paint and teach art lessons. He started a framing business in a back room of the gallery.

Every August, they would close the gallery and head out on the road somewhere. She went wherever he drove, camped wherever he wanted to stop and followed him into whatever wild plan he came up with. One summer, after he heard that senior citizens could ride the ferry boats for free in Alaska, they boarded a boat with only their backpacks, sleeping on the decks of ferries and staying in hostels of small Alaskan towns. My grandmother carried little sketchbooks that she filled with her memories of their summer days. New friends they met, a berry farm near their campground, a crawfish boil in Louisiana. There was no dance, drink or shindig that my grandmother would not have a go at.

When their first grandchild was born, my grandfather said he was not ready to be a grandpa, and so my grandmother named them Daddy Bill and Mama Polly, to the grandkids and to all our friends. 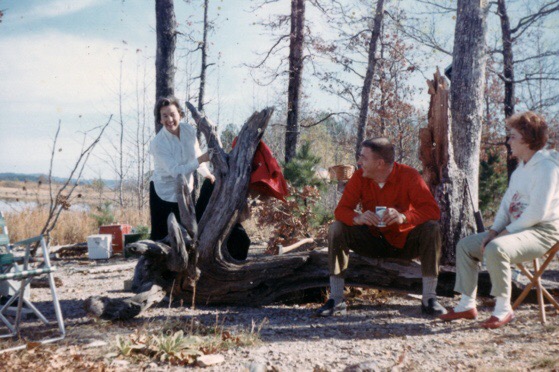 She taught me to make do with what I have, and that I have more than I think.

Sometimes we think the lesson of “making do” was a gift from an older generation that only involves money. And my grandparents definitely understood some important things about money that it seems like we are quickly losing in the modern world. Living within one’s means, staying out of debt, eating from the earth and only consuming what we need are some of the simple truths that were second nature to my grandparents.

But lately I have been struck by how my grandmother applied this lesson to so much more than finance.

As a mother of boys, she let go of them with grace when they each married. She welcomed their wives into her world and lapped up the time she got to spend with her children and grandchildren, but she did not make a lot of demands or have a lot of expectations. She was always glad to see you when you came and she would open her heart and her pantry to you while you were there. She did this without making you feel guilty for how long it had been since your last visit, but instead delighted in the moments she had with you.

It is worth noting that all four of her sons doted on her endlessly, until her dying day, and that her oldest son and his wife, my Uncle Steve and Aunt Sherry, moved her close to them at the end of her life so they could visit her daily. I have three sons myself and I wonder at the paradox that maybe the way to keep them close is to hold them so loosely in their adulthood as Mama Polly did.

Mama Polly made the most of the time she had with each of us.

She was not present in my life the way my other grandmother was. I’ve talked loads about my mom’s mom, my Grandmother with a capital “G,” who was my closest grandparent in proximity and an almost daily part of my world. When I step back, I think that Mama Polly could have let my relationship with Grandmother keep her from feeling like she could also be “grandmother” in my life.

But I don’t think she ever even thought about that. She was “grandmother” in her way, with what she had and in the time she had to work with.

Every summer she had a week at her house called “Cousins to Chimney Cliff.” My parents would drop us off for a week of peach-picking, swimming hole diving, art lessons in the garden and afternoon siestas, during which Mama Polly would make us all lie down and be quiet for an hour while she sunbathed stark naked on her deck. I. Kid. You. Not.

And in spite of the fact that my grandfather drove us around in his hotter-than-hell windowless, benchless cargo van with a cigarette in one hand and a beer in the other, we had the time of our lives.

It never bothered Mama Polly that I came home from her house with bruises and chigger bites and from my other grandmother’s house with new school clothes and shoes. Mama Polly gave the gifts she had to give, and as it turns out, they are too many to count.