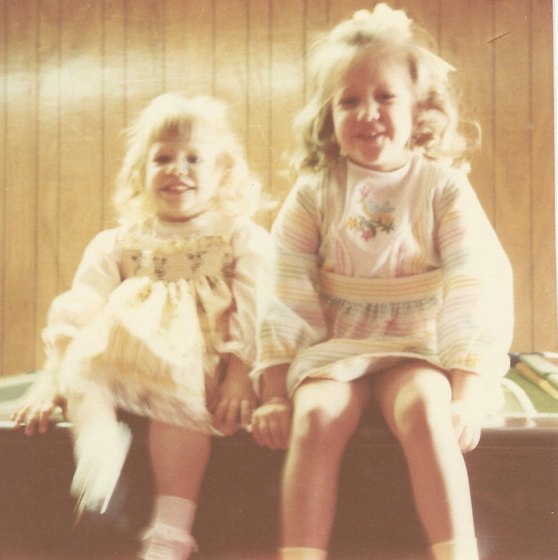 She’s Calling For Me

There are two kinds of people in the world.

Those who like to talk on the phone and those who don’t.

I am one of the latter.

Seriously, when text messaging was invented, I was like, “Where have you been all my life?”

But my sister Anna? Well, she’s a phone call kind of gal.

Somewhere in the middle of our 1980s teenage years, my sister convinced my parents to install a second phone line in our room. My mom was always tying up the regular line with the sort of long, serious phone calls required of the compassionate preacher’s wife. Mama’s voice was as sweet as sugar on the receiver, but she would let you know with a glance that you had better back off when you tried to interrupt her so you could use the phone.

Anna built her entire case for a second line on the scenario of Mother’s ministry needs, and after months of badgering, a peach colored phone with a coveted second line was hanging on our bedroom wall. The long cord stretched across our room so Anna could lie on the bed and talk at the same time.

She was so comfortable with the receiver cradled in her hand that I talked her into taking care of my phone calls whenever possible, a task made feasible by the fact that we sound exactly alike. She efficiently handled turning down boys and quitting jobs for me. Once she even called a neighbor whose mailbox I had run over without ever having to betray that it was not me on the phone. The man yelled at her even though she was calling to confess and take responsibility. When his wife called back to apologize for her husband’s temper, I gladly let Anna take that call as well.

Actually there were very few phone calls I was willing to take, but when I left home, Anna’s was always one of them.

I left home first because I was the oldest. Anna and I are thirteen months apart, but I have often felt that we are more like twins. Irish twins. Isn’t that what it is sometimes called when a young mother unknowingly becomes pregnant while she is still nursing a small baby? My grandmother was appalled. Being a lousy form of birth control was just one of the many problems my grandmother found with breastfeeding.

But I’m so grateful that I cannot remember what life was like without my sister. I needed Anna to grow up right next to me, to be behind me and and in front of me. To lead the way when I could not find it.

For our first five years we were rarely more than a few feet from one another, and we both felt the devastating sting of the separation when it did occur. My mother had an illness that meant we were frequently packed off to my Grandmother’s house or to various neighbors. As children, we were often parted from our parents, but almost never from one another. The one time I was sent away separately from Anna, I came home sucking my thumb.

When I started kindergarten, Anna stood on the bridge at the edge of our cul-de-sac, waiting for my daily return. Early do I remember the sense of relief at seeing her face, which was often followed by an equally strong sense of horror at something she would say or do. She wrestled the boy I walked to school with to the ground. Or stripped off all her clothes to swim in the creek. She yelled across the yard something I would barely dare whisper in the dark. She told my secrets and broke my toys, but I would have hidden in a cupboard for most of my childhood had Anna not led the charge to a more exciting life.

How many nights were we told to go to sleep over and over again? Threatened with spankings and extra chores and I know not what, we stayed up every night laughing, daring to jump a few more times back and forth across our twin beds over the swamp of crocodiles that lived on the floor between our Holly Hobbie bedspreads.

When I turned thirteen and demanded my own room, I stayed in it out of pride for almost a year before I admitted defeat (and loneliness) and moved back in with Anna. In our high school years when we both sought the company of our friends over each other, we would still end up back in our room at night spilling the stories of broken hearts and betrayed friendships.

So when I went away, we had to exchange the years of hushed conversations in our room for phone calls.

When no one else could get me on the phone, Anna would manage.

Various hall phones would ring with her voice on the end of it looking for me. At the camp staff cabin in North Carolina. In my college dorm. In a dreary cement hall at my Soviet bloc housing in Prague. She even figured out how to call me the summer I was wasting away in China.

Hello. My name is Anna and I’m looking for my sister Alison. Oh that’s ok, I’ll be happy to hold while you go find her.

Yes, I believe that my sister is teaching at your school this summer. Can you please tell me how I can get in touch with her?

These days when Anna calls, I am quick to answer. Partly because she has less time than anyone I know and she still makes time to call me. Sometimes she only has about five minutes to talk and if I miss her, that’s it, I won’t get to hear her voice until she has a window again.

And I need to hear her voice. It is like my barometer that the world is okay. I hear her on the line and it reminds me of my own place in the universe.

I have always been an artist, dreamily penning words in diaries and trying to convince people (most of all myself) that I am a writer. This journey has, for better or worse, been colored by equal parts insecurity and perfectionism.

But with Anna, I know who I am. She does not care what I am doing or not doing, where I am succeeding or failing. For Anna, all that matters is that I am her sister. That is enough. And in a world where most of us are trying hard to be everything, being enough is refreshing.

Anna has an uncanny way of cutting through the rubbish that plagues most conversations, a tactic that can feel abrasive if you don’t know her well. But for me, it means I won’t be able to hide from her how I am really doing.

Though the phone usually rings on my end, I am quick to call Anna if I need to talk.

I called her when I was having doubts about getting married, when I lost my first pregnancy, and other times when I have been sinking in sadness. After many of those phone calls, Anna would get herself to wherever I was to help me. She has shown up so much in my life, both for crisis and for celebration, that I am amazed at all we have done together for two sisters who have not lived in the same state since 1997.

When I ask myself what has sustained our tight sisterhood, I have to attribute it to the fact that Anna has never been willing to drop the line. There have been moments I tried to get her to, moments I was pushing away from her and everyone else in an attempt to nurse the kind of solitude that equally feeds depression and delusions of grandeur. But she knows that even on days where I can hardly speak, I need to hear her on the phone. Something breaks through to me with the sound of her voice, a brassy version of my own, reminding me who I am.

PS I am sharing this story about my sister because today is her fortieth birthday. Happy Birthday Anna! SoMuchLove for you today (and every day)!