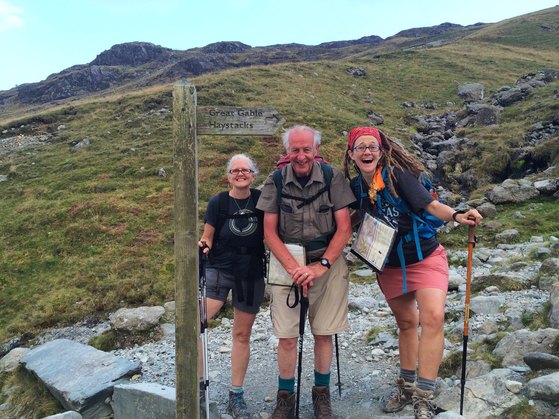 A voice came from the taller figure before we came around the fence.

If we had known you were coming, we would have made you a cup.

They were sitting with their backs to us on some old gate posts when we caught up to them, two older gentlemen, having tea.

We had seen them from a long way off as we were coming across a valley, the indistinct figures of two walkers.

We stopped and quickly took in the sight of these two characters, the contents of their backpacks (or rucksacks, in British speak) spilled out all over the ground: apples, biscuits, tea bags and zipped off trouser legs were piled on top of other clothes, maps and discarded jackets.

I wondered for a minute if they were stopped for the night, but it was far too early in the day. We had not even yet paused for lunch.

We exchanged pleasantries and Diane asked them if they were doing the Coast to Coast.

No, they were doing St Bega’s Way, a walk between two churches dedicated to a Medieval Irish Princess who fled to Cumbria to pursue a life of piety over her arranged marriage to a Viking prince.

“However, Keith here did the Coast to Coast about 40 years ago, right?”

Keith affirmed that this was true. And he added that he had completed the walk in just eleven days.

Wow. We were duely impressed.

“That’s not the way to do it though,” Keith followed up, “I always said if I did it again, I would give it no less than three weeks.”

After a bit more chat, we wished them well on their journey and went on our way. They passed us about an hour later when we were sitting eating our lunch, and then we passed them having tea again late in the afternoon about halfway up the ascent of Dent Hill.

And this was how it was with many walkers we met. We would pass them and then they would pass us, and after many days we grew familiar with the routines of the other folks on our path.

Dent Hill was our first big climb of the Coast to Coast. In retrospect, it was hardly a climb at all in comparison to what we had ahead of us, but uphill is uphill and for me, it is always a challenge.

Looking up at a hill never seems to grow less daunting for me. I have climbed enough hills to know that what is in front of me is probably not the last of it, but that I will reach the top of what I can see only to find that there is more climbing ahead. Thankfully though, Dent Hill did not have too many surprises. The top of the hill is long and flat, so we passed Keith and his companion as well as a few other walkers as we made our way over the hill, down the other side and on into Ennerdale Bridge, where the host of our bed and breakfast collected us. We stayed at Ghyll Farm, a haven of three rooms that overlooked the Ennerdale Valley with views of the sun setting behind the hills we had just come over.

We processed our first day on the trail over cups of tea and soup. I said to Diane, “That fellow, Keith, he must have done the Coast to Coast around the time that Wainwright first developed the walk.”

We wondered how it must have been in those days. No signs, fewer well-worn paths. We resolved to ask him about it if we happened to see him again.

The next morning we walked into the cheery breakfast nook of Ghyll Farm and there they were again.

“Well, HELLO!” we all said, like we were old friends.

For already on Day 2 of the Coast to Coast, it seems that everyone you have met is a dear friend. As are those you have yet to meet. The shared experience of a long walk and tired bones provides a common bond with total strangers.

Keith’s friend joked that we must be following them and we all laughed. I asked where they were staying the next night and he said, “We’re not telling you.”

Together with the other couple at breakfast, new dear friends from Newcastle, we all compared our routes for the day. Four of us were planning to take the high road, a decision Diane and I made in pure ignorance, but Keith’s doctor had forbidden him any more mountain climbs because of his heart. He was following the rule more than the spirit of his doctor’s instructions because the low route would still climb within fifteen meters of an official mountain before the day was over.

Our paths would be parted for most of the day and as we said our goodbyes, I sensed a bit of sad resignation in Keith’s eyes at their taking the valley over the peaks. I know too well that growing old can be a bitter pill to swallow for a man who used to be unstoppable.

Diane and I set out energetically on the road with the common C2C blessing of “Many miles and light footsteps” ringing in our ears. 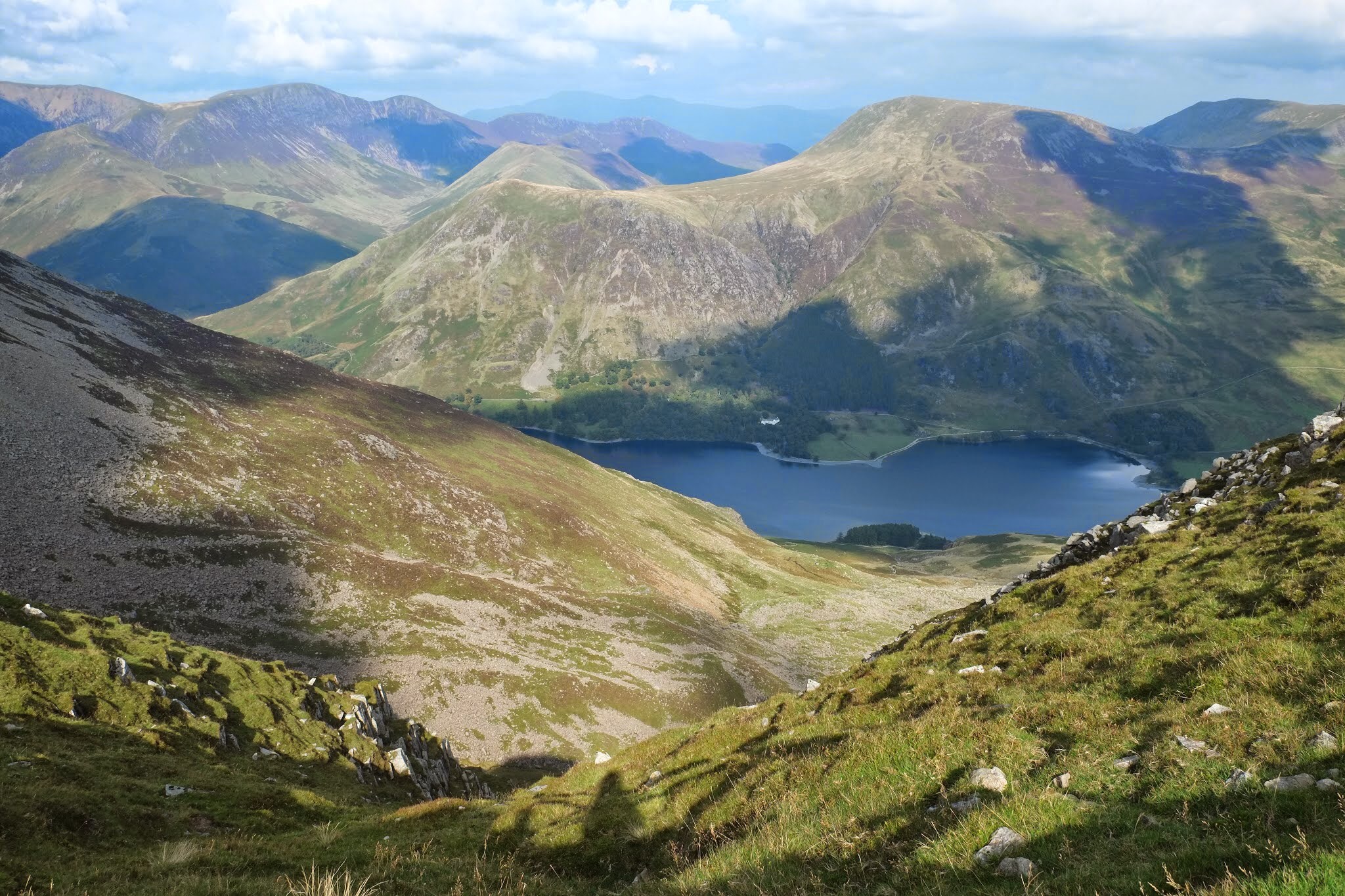 Ten hours and fifteen miles later, we were hobbling down from Haystacks to where the paths rejoined at an old slate mine. Diane and I had not seen anyone in a while and we were beginning to be convinced that we were the last two people still out on the trail. It was 6:30pm. We had been watching the shadows spread over us for two hours as were making our way down the lonely mountain. Armed with none of the resolve with which we had begun our day, we were worrying it would be dark before we found our hotel for the night.

I glanced up from the road and saw two men making their way down from the other side of the ridge. “Diane,” I said, “I think that is Keith and his friend up there.”

It is a wonderful thing, that however weary you are on the trail, somehow you can be lifted out of your downtrodden-ness by seeing a familiar face. I could immediately tell that the same was true for them. Keith’s friend quickened his pace, and when he got down to the road, he was smiling, “I can’t believe it. This morning when we left Keith said, ‘Well, that’s the last we’ll see of the girls.’ He’s going to be delighted. He’s had a rough go of it these last few hours, even saying that maybe this will be his last long walk.”

We said that we’d had a rough go of it as well, and we never expected to still be walking at this hour. We still had over three miles to go. 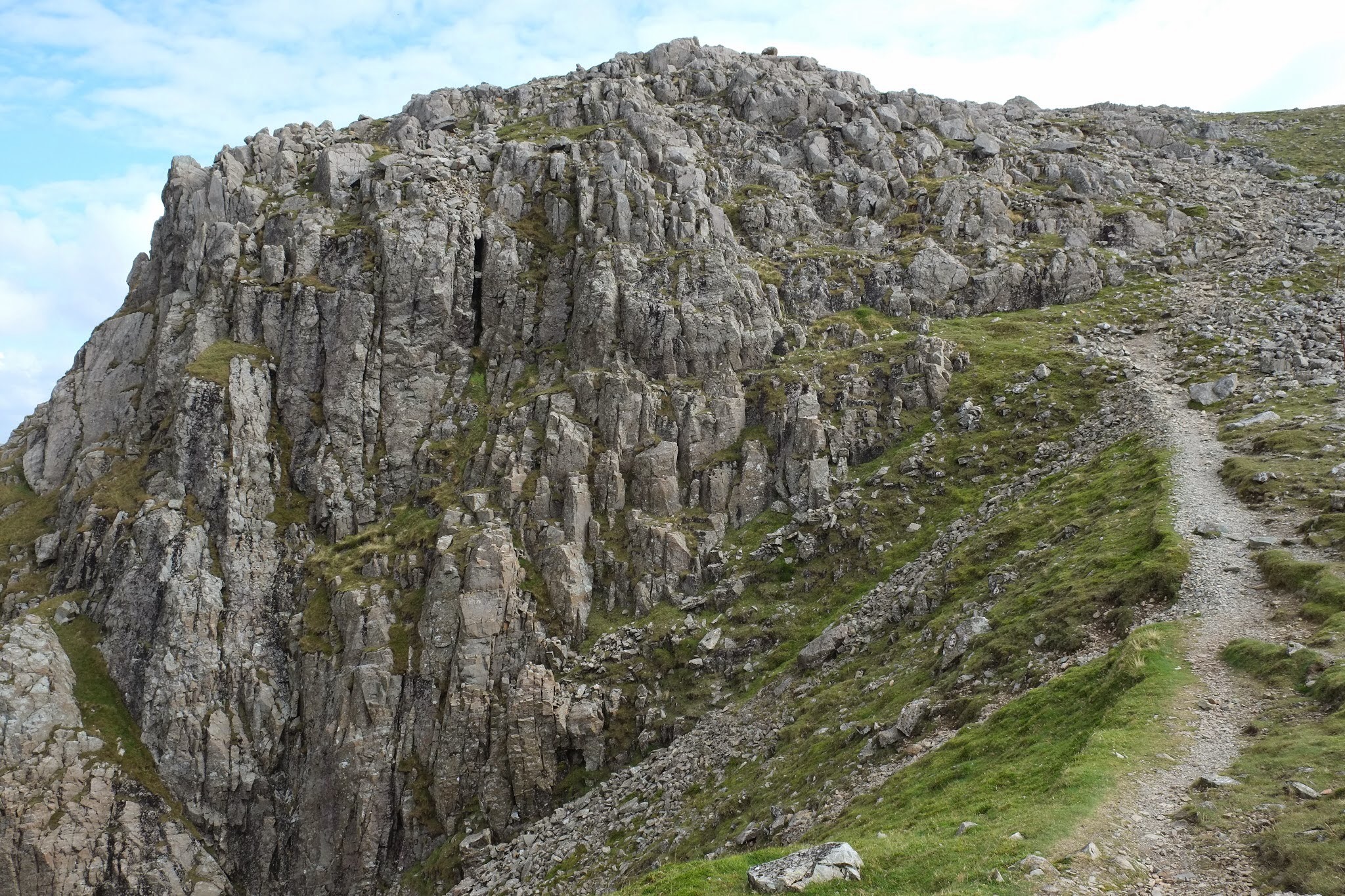 When Keith got down, he was both glad to see us and to be off the mountain. They had only a mile and a half left as they were stopping at a farm house before us, so we joined them for the last bit of their walk, asking Keith all sorts of question about his many years of walking.

His favorite bit of the C2C: between Ennerdale and Patterdale, of course.

When he did the walk forty years ago, there were not luggage transfer services and he did not pre-book his rooms, so he carried all his belongings, slept when he could find a room and kept walking when he could not.

Keith’s friend Alan also had some stories to tell. He had come all by himself to the Lakes for the first time when he was sixteen years old. He walked from hostel to hostel until he ran out of time and money and had to go back home, but the beauty of the area had been calling him back for many years.

The two knew each other because they both sing in the Manchester Police Choir, a group that actually tours. (I’ll be watching for them to come to Aberdeen.)

By the time we left them at their farmhouse, it was growing dark, so Diane and I ran the last mile and a half to Rosthwaite. As we walked into the village, a little boy on his bike rode past us and said, “You’re late!” as though he’d been expecting us for hours.

We found our hotel and the host recommended we head right over to the pub around back and get dinner, assuring us we could go “as we were.”

We devoured our pub dinner, giggling about how hungry we were. Diane ate half a chicken. As I was finishing up my plate of fried food, Keith and Alan walked into the bar.

Of course we asked.

There had been no food at the farm where they were staying, so they had been forced to walk into Rosthwaite for dinner in the dark. They recounted the tale of how the farmer had offered to give them a ride in the back of his truck if they could leave immediately, as he was taking some sheep to Keswick, but Keith had wanted to shower and have a sit down, so they were left to walk it. They were both disgruntled, and we laughed heartily at their misfortune.

Keith told us a few more walking stories while they waiting for their food. Once when he was vacationing on the Greek island of Corfu, he decided he would walk across the entire island one day. When he reached the other side, it was dark and he had missed his arranged ride back to the opposite coast. So he went to a restaurant and ended up meeting a couple who offered him a spare room in their home for the night. His wife was furious but unsurprised by his disappearance. She sent a cab over for him, an expense he resented.

He said that these days he checks in with her every day because she worries about his health when he is out walking.

When their dinner came, we told them goodbye again for the third time that day.

“Of course we will,” we laughed.

We were off to Grasmere the next day and they were turning north to Keswick, so we did not see them again. However, I imagine that I will keep an eye out for Keith when I am next in the Lakes. I don’t believe he will easily give up long walks in a place he knows and loves so well. Diane and I were both enchanted by the happy coincidence of our paths crossing so many times in two days and though we would meet loads of people over the rest of the walk, some that we liked very much, Keith would remain our favorite. We’ll always remember him fondly.